The Importance of Being Egocentric 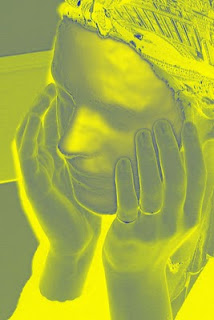 A short metablogular interlude before resuming the tales of Toyah-fandom...

Some people might think my blog entries are self-obsessed.  When I'm not recounting tales of my past obsessions, I'm mulling over what makes things tick from my point of view. How I see things.

This may very well be a fault and probably is.  However, I don't feel it would be polite for me to talk about other people all the time, and quite apart from the risk of offending them should they ever read it, I'm not sure I'm qualified.  I can only observe their behavior but have absolutely no idea what makes them tick. Of course anyone who has ever stumbled across my Twitter stream may be aware of my bite-sized ranting against sections of the populace, but as has been noted before I do try and restrict my vitriol to "...when people do..." rather than "...people who do..."

I don't think the blogosphere needs another gossip column.

Since last August the primary purpose of this torrent of superfluous verbiage has been to get my creative juices flowing and to make it easier for me to complete my novel. It does seem to have done the trick as well as despite the lack of a writing course with all the sustained peer review that entails, I have managed to link up all the chunks of novel I'd written and now have a fairly coherent first half of my first draft complete.  However, this does mean that the blog itself is merely brain exercise and won't necessarily stand up to any quality control scrutiny.  When blogging I will tend to write what comes easiest - and that's usually a transcript what's going on in my head (rather than in anyone else's).  Sometimes if I find myself obsessing over something it will turn out that writing it down and sorting it out stops me doing so. It's almost therapeutic.

Mainly though any perceived self-obsession is due to the nature of the beast. A blog is by definition one person's take on things. The word "blog" is short for "web log". It's a diary kept online and diaries are the acme of self-obsession (which is probably why they're so popular amongst teenagers).  What did I do today?

In my defense I would just point out that I do try and steer away from the "... first I got up and had a piece of toast. Then I brushed my teeth. Then I went to the store to buy some fish ..." school of bloggery. I try and make it interesting. If some conundrum concerning the nature of consciousness, evolution, quantum theory or the human mind has been fascinating me I try and share that fascination, try and break things down to their constituent parts and see if we can't work out what's going on. More often than not I'm probably unsuccessful, but I'd like to think that there may be some value even in my clumsy attempts to find out why.

And of course people don't have to read it.
blog journal metablog psychology writing