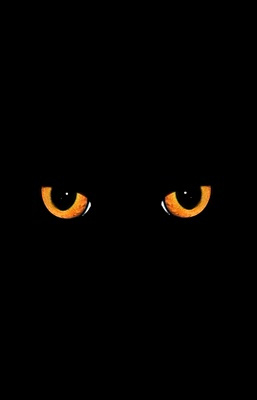 Do you ever get the feeling you're being watched?

It's a very real sensation, far from mere paranoia (although it may be a contributory factor to that misunderstood delusion).

Picture the scenario. It's 5am, it's Sunday morning, it's summer and you're walking back home through deserted streets after a club night. It's already daylight and you've got the beginnings of monstrous hangover. Nevertheless, there's something to be said for the silence and solitude. Then you stop. You've got the feeling.

Someone's watching. You look around. No sign of anyone. In the distance you can hear the engine of a lone vehicle, but that's all. Even the birds are silent. Some thing is watching. You can feel it. Outwardly nothing has changed; the streets are just as deserted as they were two minutes ago but viewed through the filter of potential observation, everything is suddenly sharper and more sinister.

Then you see it. Five floors up and looking directly at you from behind the glass of a Victorian sash window. A black cat.

Sometimes it's different. You're in a crowded urban place, a shopping centre or a station, and as in the custom, no-one is looking at anyone else. You're probably in a hurry. Then you stop. You've got the feeling. Surveying the swiftly moving crowds around you seems hopeless, but you know you're being watched. Then you see her. Over fifty metres away a woman has stopped and is staring at you. Like a black cat. As soon as she sees you see her the spell is broken, she disappears into the crowd and is gone.

You'd think this would be an almost universal feeling and that it would, at least in part, be understood. But that doesn't seem to be the case. The vast majority of opinions expressed with respect to this subject seem to be of the firm belief that it is in fact all just part of being paranoid. I'm not so sure. Whilst paranoia may include delusions of being watched, these are just false instances of a real sensation. Hallucinating the sound of a scream doesn't mean that screams don't exist.

There has been material written on this subject, in particular Rupert Sheldrake's The Sense of Being Stared At which I have yet to read, but which at first glance appears to do exactly what it says on the jacket. However, investigation around the subject reveals that Sheldrake is currently vilified by the scientific community for dabbling in what they call pseudoscience.

I am a rationalist myself, but am increasingly dismayed by the growing inflexibility being displayed by the public face of science and its vociferous fans.  As I have mentioned before, the received wisdom in this day and age seems to be that "almost everything is already known" and that it's only the solutions to high-brow ultrascientific concepts that still elude science.


"It's true we don't know everything. Proof of the existence of Higgs-Boson continues to slip through our cerebral fingers and the Theory of Everything is turning out to be a particularly knotty problem. But we still know more than you lot."

The fallibility of science is accepted but only in those fields that are so far removed from everyday life as to make little sense to the general public. What technarchists really seem to dislike is the idea that some things remain unexplained that the populace at large are fairly confident exist.

Personally I think it's perfectly reasonable to believe that some things exist that are not yet known, without having to resort to the paranormal to explain them. The feeling of being stared at included.

A fact commonly bandied about is that when you're talking to someone, a large percentage of the communication passing between you is non-verbal. This is why speaking to someone on the phone is such an appalling experience. It has neither the full range of sensation you expect from spoken communication or the internalization you get from the written word. Some people claim to enjoy it of course; we're all aware of the cliche of the telephonic gossip. I think what they enjoy though is the chance to perform a monologue to a captive audience - these long haul telecons are invariably one-way.

But what about the rest? The visual, gestural, subconscious communications? We pick them up without realising it, our senses working perfectly in union as a result of millennia of evolution.  These finely tuned perceptions are old, very probably predating communication. A subconscious awareness of the world around us is very useful from an evolutionary point-of-view, it helped our ancestors survive and may indeed have contributed to the emergence of consciousness itself.  Its more recent application to communication is a happy accident.

In the distant past, being watched was a dangerous state of affairs, especially if the eyes doing the watching belonged to a cat.  A big cat. The earlier you detected this attention the more likely you were to survive and pass on the genes for detecting unwanted scrutiny.

This detection doesn't have to be supernatural. It could just be a clever subconscious application of the senses we already have (including those we may not be aware of); information constantly being gathered and processed below the threshold of awareness and only being escalated to conscious red alertness if watching eyes are detected.

Even if they're no longer the eyes of lions.
brain journal mind psychology