Note: I am trying to forge ahead with my novel at the moment so even though I will still attempt to post a blog at least weekly, today's entry is a slight rewrite of something I first wrote in the early 2000s; hopefully still relevant today.

Everybody complains about their job. It's part of the human condition. We all wish that there was some miraculous magic answer whereby we could be given all the resources we need to live full, happy and comfortable lives and not have to lift a finger. Unfortunately we can't all work in senior management, and there will always be far more boring admin that needs doing than there are people willing to do it, and whilst there are better ways to spend your days than deciphering some self-important kingpin's scrawl and transcribing it into electronic form, there are worse ways too. 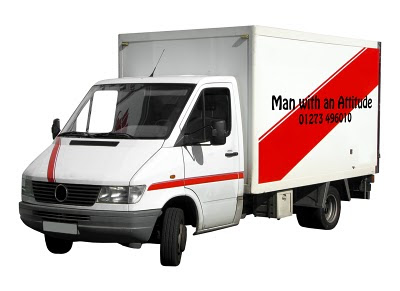 However, this aside, some people do seem to end up in jobs that are quite specialised in their way, and yet eminently unsuitable for them. Furthermore, some (again relatively specialised) professions seem to attract those people who most dislike the job.

I'm talking about removal men here. And I'm not being sexist - they do seem to be predominantly male, hence the more recent spawning of the Man With A Van subset of this profession.

Firstly, almost every single removal man I've ever encountered seems to completely and utterly, absolutely above all else, loathe carrying things. Er... perhaps I missed something but I think you're in the wrong profession? Didn't the job description give you a clue? You could argue that years of constant lifting and carrying of heavy objects causes resentment to fester, but surely if you find yourself in a job where certain central aspects (say the pay, the hours or the boss's breath) are intolerable, the best thing to do is leave and pronto.

So - they hate lifting and carrying. These activities aren't actually difficult if (unlike me) you're fit and healthy, but on the whole most Men with Ven aren't either.  More gut than the deck of a North Sea trawler, they appear subsist on beer, fags and fried breakfasts.

Breakfast brings us neatly to the second and perhaps most inexplicable behavioural peculiarity possessed by removal men. They are obsessed, and I mean seriously obsessed, with cups of tea. We all like a nice cuppa, but sometimes it's impossible. Like, for instance, when someone is moving house and all of their worldly goods are packed away including the kettle!

Moving house is one of the most stressful and traumatic experiences ever known, and when you're going through it, the last thing you need is some sweaty lout dropping heavy handed hints about being thirsty, sulking when these are ignored and then breaking your furniture in a fit of pique. For God's sake man, if tea means that much to you, why not bring a thermos of the stuff into work?

All in all, your average removal man is about as suited to his job as Howard Hughes would have been to the job of dustman. But I have a plan. I think the employees of Humpitt, Shatter & Cuss Removals would be much happier elsewhere. So where can we find them a job where there's absolutely no heavy lifting, fitness is not required and you can drink as much tea as you like? Why, admin of course!

I think it could all work rather well.
job journal people

Sulci Collective said…
Schoolboy error here Chris. When moving, the kettle should not be packed but taken with you in the car so that you avoid problem of which box it's in and is that box buried at the bottom of the mound when in the new house. And I don't even drink tea or coffee.

On the wider theme of job disatisfaction, I had hoped by now we'd be automated enough to live within a leisure economy, whereby most of us can give vent to their artistic side and thereby generate lots of export income for GBPLC. Instead the opposite has happened and us administrators have to work longer hours, eating lunch at our desks etc, for fear of redundancy snapping at our heels.

Catmachine said…
You know, it wouldn't even have occurred to me for the kettle to travel in the car (but makes perfect sense, given the Men With Ven's tea obsession).
Thursday, October 28, 2010 10:22:00 am

stuart said…
I used to work in a petrol station and used to study these men with vans on a regular basis. They all walked with the same neanderthal swagger, their beer bellies would be some kind of badge of masculinity and would come out at the first sign of the sun. They would buy the Star or the Sport, without fail. Perhaps the strangest observance was that, 9 times out of 10, there would be three of them in the van. Some kind of mystical white van man number obviously.
So similar were most white van men I was forced to conclude that they were the products of some secret Government cloning experiment.
Friday, October 29, 2010 7:59:00 pm