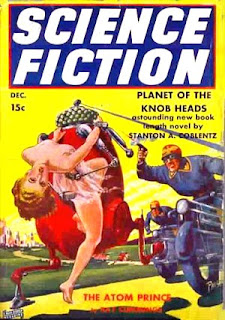 I remember the first "officially" grown up book I was given. Unlikely to find its way onto school syllabuses even now, it was the collection First Love, Last Rights by Ian McEwan.

So it was my first "proper" book, having up until that point only indulged in the allegedly juvenile genre of Science Fiction (or SF as it is known to its fans - not "SciFi"). Must have come as a bit of a shock to me, eh? All those serious, adult themes - sexual references especially?

McEwan's short stories were quite tame compared to some of what I'd already read. As an avid devourer of SF anthologies and collections as well as novels I'd come across some right weird shit, I can tell you. And yet not being considered serious art this perverse literature managed to stay off the radar, filed away on that section of shelves in the corner of the public library between Asimov's robots and Clarke's astronauts. Furthermore this wasn't mere titillation. This was intelligent, articulate discourse on the disposition of sex and sexuality and yet some of it so graphic and surprising as to make McEwan himself blush.

A lot of this was to do with the New Wave. Long before that epithet was applied to a unique combination and synthesizers and Crazy Colour, it was used to indicate a fresh direction for the much maligned genre of SF. Up until the 1950s, much SF continued to be variations on a theme. Space opera, galactic empires, aliens - all grand ideas with the potential for exploring some fascinating concepts and waxing philosophical about the nature of being, but in some manner also appealing to its more juvenile audience - in many ways just Cowboys and Indians with added slime and lasers. Certainly not many of the protagonists tended to be anyone you could identify with, all highly trained engineers, scientists or inventors.

The 1960s was a time of global change, and the world of SF writing was not free from the influence of the counterculture, most notably the magazine New Worlds under the aegis of Michael Moorcock. This movement brought forth surprising and groundbreaking novels by authors such as J G Ballard and Kurt Vonnegut and it's fair to say that after this time nothing was ever the same again. The gloves were off, taboos broken.

And it was these new wave stories finding their way into SF anthologies that provided me with much of my early sex education. Random sight-unseen loans from the SF section of Muswell Hill library not to mention the contents of the paperback bargain bins in the Colney Hatch Lane branch of Woolworths were the introduction to a number of astonishing stories, fascinating and disturbing in equal measure.

In particular James Tiptree Jr's anthology Ten Thousand Light Years From Home (10p from the bargain bin - purchased mainly because of the spaceship on the cover) ensured I'd never quite think about sex in the same way as my peers. Whilst the confident arrogantsia at my school were hunched over the "rude bits" in Killer Crabs or other cheap horror novels at break-time, I was discovering the consequences of exogamy in Tiptree's astonishing opening story "And I Awoke and Found Me Here on the Cold Hill's Side" in which it's revealed that when we finally do encounter aliens we just want to fuck them or die trying, or what it was like to have no sense of pain and to travel with cuddlesome empaths having orgies in The Lovepile, a spacefaring psi-powered paper bag in Painwise.

It wasn't just sex though. Other adult themes were aired by these books in ways that expanded the horizons of my 13-year old mind in ways I'd never imagined. Somehow being the nerdy kid into Doctor Who and Star Wars had opened hitherto undreamed of doors and changed the way I'd think forever. The name John Wyndham may now conjure up images of killer flesh-eating Triffids for most people but for me it was the thought provoking and disturbing short stories (most notably those collected in the anthology The Seeds of Time) that stuck in my mind.

So compared with the expanded universe of possibilities already encountered, the subject matter of Ian McEwan's acclaimed collection of short stories was nothing new, and could conceivably appear almost tame when compared to some of Karl Glogauer's experiences with man's inhumanity as he falls through a series of past lives throughout the 20th century in Moorcock's Breakfast in the Ruins.

But nevertheless and despite all this - many people would still consider the McEwan the first "proper" book I'd read and dismiss anything that might have come before. Genre snobbery is even now a force to be reckoned with. This is probably partly to do with the history of the genre - the lurid covers of the early twentieth century SF pulps must have ingrained themselves on the collective unconscious to such an extent that people who'd never read them would have been fairly confident that this was nothing more than the literary equivalent of King Kong.

The New Wave and its aftermath should have changed all that but by now the forces of the marketplace were in charge. The compartmentalisation of fiction meant you sold more by aiming genres at their markets. This includes so-called literary fiction - as New Weird author China Miéville recently pointed out much of this could comprise its own genre LitFic. In many ways this compartmentalisation is no more than the publishing equivalent of DVD Region Codes - if your head lives in Region 1 (LitFic) then you're not going to be interested in any Region 2 (SF) releases. 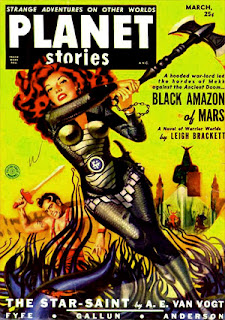 This has led to the almost farcical situation of books that are clearly SF or Fantasy (from the subject matter) being classified as LitFic in order to reach a wider audience, the fantastic elements being dismissed as satire or parody. One of the stories (Solid Geometry - adapted for the screen in 2002) in First Love, Last Rights was SF as far as I was concerned and more recent examples of this doublethink include the popular Cloud Atlas, The Time Traveller's Wife and The Lovely Bones. Author Michel Faber (whose novel of Victorian prostitution and hypocrisy The Crimson Petal and the White was thought so highly of by his publishers that they tried to persuade him to seek British citizenship simply so that it would be eligible for the Booker Prize) had his first novel Under The Skin shortlisted for Whitbread First Novel Award. Under the Skin is a satire, apparently, despite concerning a clandestine alien presence on Earth for the purpose of farming human beings...

It is unlikely that this state of affairs is going to change any time soon, tied as it is to the sales practices and policies of an industry under siege - but how about we hack our brains to make them Region Free?

Sulci Collective said…
I have raged tirelessly against the dinminishing nature of genre labels as lazy marketing. But...

I read Mieville's "The City And The City" on the strength of you tweeting about his personal appearance at the Free Word Centre (incidentally my place of work) and the recommendation of my friendly neighbourhood indie bookstore owner. I'd also read an interesting blog questioning why Mielville was never mentioned for a place on The Booker, because he was essentially disqualified by being a fantasy writer.

I will read more Mieville, but "CityX2" provoked my ire. To such an extent that I am now writing my first quasi-commercial and yes whisper it, GENRE book. "CityCity" is an impressive work of the imagination, a trip down psychogeography lane, but the genre part of it, ie the police procedural/thriller elelment is almost nugatory. On the sample of this one book (weak I admit)seems you can't conjoin a literary work with genre after all.

Or can you...? That's my aim. As a one-off only mind. After that, it's back to writing books of ideas and language and humanity. You know, like what we used to call fiction as written by the likes of Kafka, Faulkner, Lem, Burroughs et al.

Until then, happy pigeonnholing everybody!