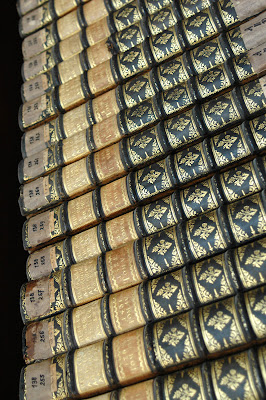 As the light threatens to start fading on the final day of a year, it's time to look back, take stock and then decide to do everything differently, starting tomorrow. Well, these reviews of the year make for cheap entertaining TV, hopefully they can serve the same purpose for one whose primary medium is blog.

As far as this blog and its associated writing is concerned, I didn't do too badly in 2010.

In January I was still writing every other day, a remnant of the daily writing with which I'd started back in August 2009. The whole idea was to clear the creative tubes to allow me to complete my novel. Instead, the blog entries seemed to take on a life of their own.  Curiously enough they were at their most popular when I started writing series of memoirs, staring with my Dimensionally Transcendental Confession and then moving on to I Was A Teenage Toyah Fan, the latter of which proved so popular that I am now planning to rewrite it more fully in the early months of 2011 and then make available via Print On Demand at Lulu.com.

These successes were all very well, even if they weren't the blog entries that entertained me the most, but the problem was that in developing into an end in itself, the blog was no longer serving its original purpose, which was to get that damned novel finished by the end of the year. It took me until December to discover something that would do that, namely 750words.com which I mentioned in my previous blog entry.

Unfortunately December was too late to discover this magic bullet if I wanted to get the novel finished by the end of the year. I've done very well (even though I say it myself) and am now within spitting distance of 80,000 words. I imagine the story will end before I reach 90,000 and then that will be the first draft done. Not only will I have the satisfaction of having completed a (second) novel, but also I will finally be able to reward myself with the iPad that I already bought with that very purpose in mind (it's been sitting on top of the cupboard still in its box, having been bought early to avoid the VAT increase).

So with that in mind, it's time to make some promises to my writing self for 2011.


Of course after the first draft is complete I will have the joys of rewriting ahead.

I understand that I am expected to murder my darlings.
journal writing

Unknown said…
I'm looking forward to the fuller Toyah memoirs :) Loved the blog series so will definitely get a copy of the whole thing when it's done :)

Also enjoying many of the other blogs, you have a gift for writing :)