Down the Tube 2: Hidden Above 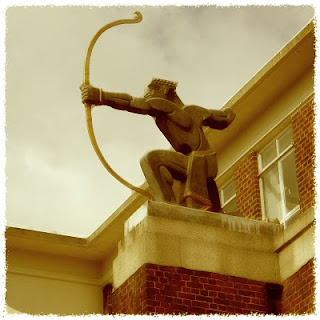 East Finchley Station was quite an impressive building. I could forgive it for being above ground because it had an aura of mystery. For a start there were more platforms than the station actually needed. This was a conundrum. And then there was the statue of the archer looming over the platforms, caught in the act of loosing an arrow towards Central London.

To feed my growing obsession I told the staff at East Finchley ticket office that I was doing a project at school and was given a red plastic folder which contained a collections of maps and timetables. This was wonderful. The map was far better than the ones I'd had to make do with up until now, tiny ones in the back of diaries and black and white versions in the A-Z. This one was in full colour and made of card, folded twice in to what years later I would discover was known as a “triptych”. I covered it in the sticky see-though plastic sheeting you got for covering school books.

I made a nuisance of myself going back to the ticket office several times and asking for more maps for my friends at school whom I was trying to get interested in the underground. Eventually the woman who worked in the ticket office got cross with me and told me not to come back. After that I used to make sure she wasn't on duty before asking for more stuff. The Indian man who worked there was the friendliest, I decided.

Also in the folder was a bus map and most intriguingly of all, a big fold out map called "London's Railways". This not only had a map of all the tube lines but all the British Rail lines as well.

Somewhat irrationally, I hated the British Rail lines. They weren't proper. They should build more tubes instead I thought and began drawing maps of my own, devising the orange Outer Circle Line part of the route of which which I decided would go through East Finchley with a brand new station at Muswell Hill Broadway going on to Bounds Green and points east.

I even started travelling by tube unsupervised. At first it was in secret - my friend Robert Knight and I went to play in the park by East Finchley station and took a quick trip to Trafalgar Square straight there and back with no changes. After that came an "official" test run during which my parents dropped me off at East Finchley and picked me up from the next station, Highgate. From there on in I was unstoppable and began to explore further afield. I started going to Clare Ash's Children's Theatre Workshop on Saturday mornings on my own, getting the Northern Line to Tottenham Court Road and then changing onto the Central to get to Bond Street.

There was something otherworldly about these subterranean places. The upright consoles of the ticket machines with their illuminated sloping tops displaying giant red prices 20P; the smell of the dust and warm tunnel air being pistoned through London's arteries by the silver and red metal worms. And the sense that this was just the tip of the iceberg, that the underground I knew was just the surface and that further down into the earth and deeper in time there were hidden stations and lines that would transform my humdrum existence if I only could find them.

There were clues everywhere.  For instance, at nearby Highgate the sign at the top of the escalators read "Northern Line: Platforms 3 and 4" despite the fact that there were only two platforms. What had happened to Platforms 1 and 2? Were they hidden somewhere nearby I wondered? Might I discover a secret passageway leading to them?

It turned out that they were hidden, but in an unexpected place. Above my head.

Highgate Station was reached in a variety of ways - there were some steps that led out into a small car park, an entrance at the end of a cul-de-sac (which could also be reached from the main road by descending a vertiginous concrete path) and a long thin escalator that emerged from a small brick shed on Archway Road. These surrounded a void area thick with trees; on the map it appeared to contain nothing although some older A-Zs seemed to indicate a railway line there. 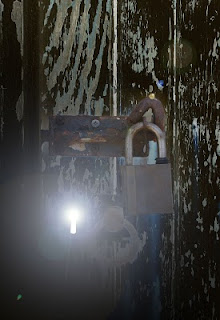 It was a derelict station lying at the bed of a deep artificial gorge, overgrown with plants. The tracks themselves were missing, but the brick walls of the station buildings on the island platform bore the unmistakable imprints in discoloured brick of now-removed London Transport roundels. I'd done it. I'd discovered Platforms 1 and 2.

We wandered up and down the platforms, discovering them to be stripped of any accoutrements, the station buildings bare brick cuboids with metal window frames supporting a large overhanging roof. No long abandoned chocolate machines. No ancient posters. There was however a set of stairs leading downwards.

I walked down these steps to a padlocked wooden door through which leaked familiar sounds and smells. Burnt dust, the creaking thud of the escalators. These were sensations I imagined similar to those experienced by Wells' Time Traveller when he investigated the shafts that led down into the Morlocks' domain. I’d discovered something just as momentous; the link between the hidden and reality, the wormhole...

Arriving over the top as I had done felt a bit like cheating.
childhood journal memoir obsession tube underground