Down the Tube 3: Dism Rly

Previously in this blog...

At the age of nine or so an unnamed friend and I discover two disused platforms at Highgate Station.

The gorge was set into the side of a hill which meant that the cliff face that loomed over the eastern end of the platforms was much higher than the one to the west. In this artificial escarpment yawned two enormous tunnel mouths. My friend and I decided to investigate. 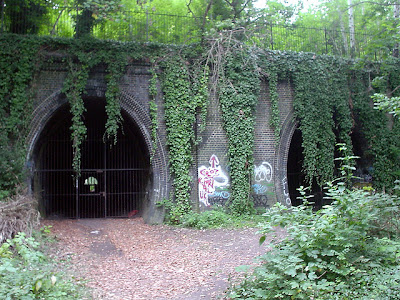 There were no tracks or even sleepers present on the line, just pumice rubble and weeds. As we approached the twin maws we started to feel apprehensive. It was going to be very dark in there.

"Shall we hold hands?" I suggested. I was serious.

We only got a few yards in before panic got the better of us and we fled. But where did these tunnels emerge?

A little nearer home than Highgate Station was Highgate Wood, reached by going through the park (which obviously had aspirations to be like its bigger scarier brother given that it bore the name Cherry Tree Wood) and crossing a couple of roads. It was approached uphill through a wide footpath between people's gardens at the top of which you crossed over a bridge of some sort before arriving in the wood proper.

And it was a proper wood, make no mistake about it, a lung-shaped remnant of an ancient forest that had been there long before London and would probably outlast it. Once you were deep enough into it all you could see were trees. Endless trees. No exterior chinks of light breaking through from open spaces (even though there was one at the centre where people played football and cricket). No creosoted fences of suburban back gardens. Unlike its infant brother Cherry Tree, Highgate was the kind of wood you could get lost in. Walk far enough in any direction and you might find yourself back where you started, the tall trees warping and bending reality around you. When learning about local history, our teacher had told us that Highgate Wood was one of the places they'd buried the bodies during the Great Plague. No-wonder there was something of the night about the place even at noon. I imagined thousands of skulls staring sightlessly into the earth beneath my feet. 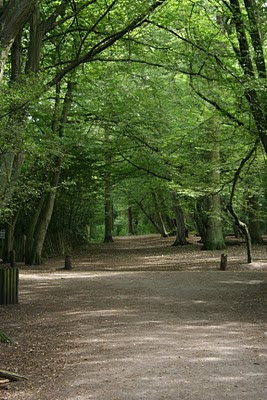 Once again I was with one friend, possibly the same one with whom I'd explored Highgate Station. I don't remember his name now although I do remember that he was thin, freckled, dark haired and had a face like a horse. Eschewing the paths we were making our way through the undergrowth, pushing through bushes and wading through piles of dead leaves, stifling giggles when we came across a man lying on top of a woman. My friend said they were having sex, which confused me because they were wearing clothes and I had assumed nudity was a prerequisite.

The ground began to slope down further and we ended up in a shallow trench. Looking back we could see that it passed beneath the odd bridge over which we'd entered the wood. Under the leaves and dirt the ground crunched in a familiar manner. Pumice rubble. This was another abandoned railway. Could it be something to do with the twin tunnels of Highgate? We certainly weren't far from there. Excited I struck out in the direction leading away from the bridge, the direction I hoped would lead us to Highgate station.

The path we were following reached a chicken wire fence topped with barbed wired which it continued running alongside. Beyond lay...

Acres of tracks. On these tracks sat tube trains, bold as brass out in the open where, I imagined, they had no right to be. I felt as if I had opened a cupboard door in my bedroom and discovered a whole new wing of the house.

Where in God's name was I? My knowledge of the underground network whirred and chattered in my brain but there was no logical explanation for this. The Northern Line was the only line anywhere near here and that went underground just past East Finchley station up by Cherry Tree Wood.

There were two men in hardhats near by.

"Excuse me!" I shouted. My shyness had been totally eradicated by my need to solve this mystery, the Mystery of the Tube Line, "What line is this?"

The men looked confused. I suppose it must have been very odd to be going about your business in a London Transport tube siding only for a child to appear behind the fence beyond which only moments ago all had been visible was undergrowth.

Nevertheless one of them got it together enough to answer.

"It's the Northern Line."

This made sense, but my head was still spinning. A secret branch of the Northern Line? A disused station was one thing, the route of a vanished railway another, but those were live trains sitting over there in rows and were as confusing to me in their multitude as coming across a person with five eyes in their face would have been.

Eventually I figured it out. This must be where the tracks at the mysterious two extra platforms at East Finchley led instead of plunging into the ground by Cherry Tree Wood like their peers. And if the tracks led off to the disused Highgate station in that direction, then it meant that once upon a time there had been two routes from East Finchley to its neighbouring stop.

Where had the line run after Highgate? I hadn't a clue. In a world without the internet no Google Maps or hobby sites being run by enthusiastic amateurs meant that I was unlikely to find out. It wasn't the sort of thing they'd have books about in the library.

However, the Ordnance Survey map of London that was one of my prized possessions offered a clue - a dotted line labeled Dism Rly. Dismantled railway? On the map it seemed to disappear off towards the uncharted territories of Crouch End in one direction and Muswell Hill in the other.

Did this mean that Muswell Hill had once actually been served by a tube station outside the Outer Circle Line of my imagination?