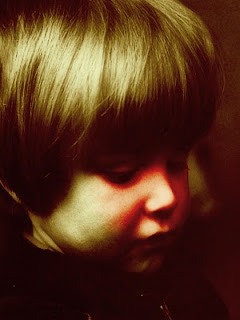 I watched a fascinating documentary on BBC4 last week, part of the series The Brain: A Secret History. It was all about emotions, where they come from, how they work and what they're for.  All interesting stuff, but I was surprised that at no point was the evolutionary root of emotions discussed - it was all behavioural. And yet I've found that simply looking at things from an evolutionary perspective can provide astonishing insight into what makes us human and just why it is that we do all of the things that we do.

Evolution says that anything that makes it far more likely for organisms to pass on their genes to future generations will be exaggerated over time, and for sentient beings lusts, urges and instincts are what make us do things we have to (if we didn't "enjoy" food we'd forget to eat and starve to death).

The stronger the lust and protective instincts felt towards a chosen partner will result in more sex and therefore more children; the stronger the instinct to protect and go out of ones way to nurture one's offspring means that more of the children survive. Simple mathematics states that as time goes on the number of individuals who through random mutation experience stronger combinations of these varieties of instinctive emotional response will increase until ultimately it becomes the norm and is a fully fledged emotional behaviour in the psychobiology of the species. Then we can call it love.  But if it had happened that, say, embarrassment and guilt had inexplicably made it far more likely we'd pass on our genes then for one thing Mills & Boon range would be a very different proposition.

Embarrassment and guilt are two important emotions which are two sides of the same discomfort coin, one which has been legal tender in my mind for as long as I can remember. Sometimes as a young child I would feel so embarrassed that I could barely cope with what was going on around me and allegedly flew into a rage (which I don't remember, but I am reliably informed happened) or became so mortified that I shut down the emotional side of things. 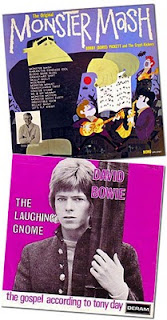 I would embarrassed at the most peculiar things, often to do with pairs of things or varieties of things. Sometimes my source of discomposure would be what I imagined people might be thinking that I was thinking even though I knew I wasn't thinking it, if you see my meaning.

One early example of an embarrassmeme was the lyric "Dracula and his son" in the song Monster Mash. I was embarrassed to hear it. Another embarrassmeme occurred the first time I saw the video for David Bowie's Laughing Gnome - it was the part when the next morning the Gnome turns up with his brother. For one horrible microsecond I though he was going to be the Crying Gnome and was consumed with embarrassment. This swiftly passed when it turned out he was only "his brother Fred".

A further occasion was when watching Play School or some other children's show. The presenter announced she was going to tell us the story of:

Before she could even finish the sentence I was swamped with embarrassment again. I was afraid that there were going to be two bees, one of whom was going to be Busy and the other Lazy. However this moment of shame only lasted as long as it took for the presenter to finish her word and in fact the sentence turned out to be:

Phew. The embarrassment evaporated.  This whole drama had taken a microsecond but had managed to be all consuming in that time.

Other concepts would overwhelm me in the same way. As a child I tended to see everything in a binary state which meant that in the universe things were either Good or Bad. I was always worried that I was on the Bad side of the line. This really wasn't helped by the famous nursery rhyme:

I took this really personally. It made me angry. However, part of me suspected that my objection and anger at this generalisation was because I really was Bad. Well of course I was Bad. I was a boy, and so I was made of frogs and snails. The word Bad began with a B and so did the word Boy. The word Good began with a G and so did the word Girl. Further evidence of the binary nature of reality upon the wrong side of which I had been born through no fault of my own.

At that age I didn't even know what spice was. Something wonderful no doubt.

I also picked up a strange eco-message at a very young age. I'm not sure where that came from unless it was a hangover of the hippy movement. Anyway, what it said was that trees and flowers and the countryside were Good things.  This also upset me. I liked science and numbers and cities and space. I felt that this was yet further proof that I was Bad, because I liked the Bad things. I felt bad about liking the Bad things, but couldn't help liking them nonetheless.

Losing myself in obsessions was one way I could forget my inherent badness. I don't remember any of the techniques now, but there was a time when I was seriously obsessed with origami. I'd get books out of the library about it and practice until I managed to construct some quite complex objects out of folded paper. It was very comforting.

If I attempted to revisit it in adulthood I wouldn't know where to start. I suspect that the origami meme fitted quite well into the particular shape my mind was at the time and perhaps that as my mind has matured and lost its flexibility I lost the ability to learn such things.

It might be worth a try though.  Next time I get angry or frustrated by the behavior of my fellow passengers on a crowded bus perhaps I should try and fashion my ticket into a Kawasaki Crane...
childhood embarrassment journal memory mind

Unknown said…
i'd suggest emotion and embarresment or social awareness or conciousness is incredibly useful. it enables u to think empathically and make n maintain stronger relationships which ultimatly would enforce community and strenthen the group. i'd say that sticking and working together are probably the most important survival aids we have ever had. mind you, I am british. so maybe i'm trying to explain or justify my English sense of embarresment and emotional repression! :-)
Sunday, January 23, 2011 9:12:00 pm

Trainee Psychotherapist said…
I also watched the same documentary and found it incredibly interesting. (Also the two other episodes in the series).

Reading through your post I'm intrigued about the embarrassment of "pairs of things" - did you ever find out what caused the embarrassment/where those feelings came from? During my training I've found that the most eye opening thing is (through therapy) finding out why I do certain things/feel in a certain way about things. All interesting stuff!
Tuesday, February 01, 2011 10:51:00 am

Unknown said…
Shame and social embarrassment are learned from early childhood from the first moment that parents say no. The disapproving looks of parents, the associated voice tones, emotions and prohibitions set up to engender our social values and even morals are how we learn to assimilate to society.