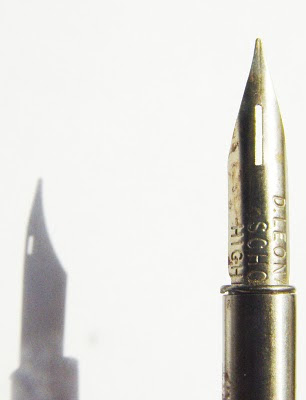 The introduction of the keyboard into my life - that is at first the typewriter and then the computer rather than the Yamaha Home Organ - I found to be The Great Enabler.

Before that I was always hamstrung when it came to expressing myself on paper and I suspect the messiness of my writing and how slow I was were a contributory factor to the "disappointment" teachers expressed in my efforts. For some reason they equated writing neatly with trying hard and intelligence, despite no evidence to support this whatsoever.

At first I used to blame this on the fact that I'd effectively missed being taught joined up writing at school. I left Galliard Road Junior School in Edmonton the year before we learnt it, only to arrive at Tetherdown Junior School in Muswell Hill and discover that they'd learned it the year before. I ended up teaching myself and whenever possible would lapse back to printing.  Handwriting was just too damned slow; I would end up missing out letters or even whole words as my brain raced ahead of my hands and would lose all sense of what I was trying to say. This was only exacerbated in secondary school by the insistence on the use of fountain or cartridge ink pens.

Even now I find printing far easier and clearer; something about the act of doing so makes it feel like I am drawing the letters and drawing is something that I've always been able to cope with. I was even kind of good at it sometimes.

Once keyboards came into my life I discovered that I wasn't bad at expressing myself in words either, despite accusations of being "quiet", "shy" or "hard work" by my peers. Perhaps I found conversation and small talk difficult, but given the opportunity to think out my words and get them down on paper I was as capable of eloquence as the best of them.

But even after typewriters and then computers became commonplace, I discovered that some people still insisted on things being handwritten. This was usually a problem for me.

I suspect that there were a number of reasons behind this.

Firstly simple Luddism. To someone growing up before the age of the keyboard and the computer the use of such tools was seen as a skill, a luxury, something which somehow required more effort and resource than simple pen and paper. One instance of this was in one of the first office jobs I had in London in which the big boss sent a memo round which asked all members of staff to write something in reply (I can't remember what it was about now - possibly about a strike or about security measures during Gulf War 1) which he insisted "should be in your own hand". I think there was no malice intended here but just that in his head it would be far too much hassle if everyone had to type and then print out their replies. He was trying to save time.

Not so! I thought, but hand wrote the thing anyway, because he was a scary fucker.

More sinister is when employers insist that job applications be handwritten. Why is this? Surely in this day and age no-one considers a keyboard too high tech? Well no, they don't but as part of the selection process these human resources departments hire graphologists to decipher the character of their potential employees. This strikes me as sneaky and unprofessional.

I am by no means dismissing graphology as a pseudoscience even though some people might lump it in with palm reading and astrology. Personally I can imagine that handwriting offers many insights into the character of the person concerned via straightforward psychological mechanisms. I am sure studying these might indeed reveal their true intentions or character just as effectively as studying their choice of words or facial expressions when speaking. But even if graphology was generally accepted as a hard scientific fact, there'd still be nothing to prevent you from getting someone else to complete the form for you, especially if you think they'd be more likely to get the job.

There is a third scenario when handwriting is insisted upon. You can kind of understand it. Given the way modern devices allow you to do so much it's no wonder that people running training courses or workshops might insist upon people using pen and paper during exercises; I'm sure there's nothing more annoying than someone reading their email, checking Facebook or playing Angry Birds when they're supposed to be making notes. However, this is unfair on people who suffer from the same affliction I do.

You see I no longer blame my inability to handwrite on missing lessons at school. It turns out that the inability to handwrite neatly or constantly is due to Motor Clumsiness which can be one of the symptoms of Asperger Syndrome, something which as I mentioned in an earlier entry I am fairly sure I have albeit in a mild form.

Such insistence on handwriting is therefore discrimination; an accessibility issue. Next time I come up against this prejudice perhaps I should say something.
aspergers autism brain journal mind people psychology typing writing