"In the end, it was the Sunday afternoons he couldn't cope with and that terrible listlessness that starts to set in about 2:55, when you know you've taken all the baths that you can usefully take that day, that however hard you stare at any given paragraph in the newspaper you will never actually read it, or use the revolutionary new pruning technique it describes, and that as you stare at the clock the hands will move relentlessly on to four o'clock, and you will enter the long dark teatime of the soul."

Douglas Adams, Life, the Universe and Everything

Sunday evenings are amongst the most unpleasant time spans it is possible to experience. Whilst both Tony Hancock and Wowbagger the Infinitely Prolonged may have had a problem with Sunday afternoons, it's only during the evening when things start to get really nasty and you become filled with a sense of disappointment and self loathing because once again you didn't get nearly enough done.

This isn't surprising. When you're at work during the week then of course you don't want to indulge in any extra-curricular activity - the working week's hard enough as it is without extending it into the evenings. And in recent years, you observe, it seems to have become so draining that it takes most of the weekend relaxing before you start feeling even remotely human again. 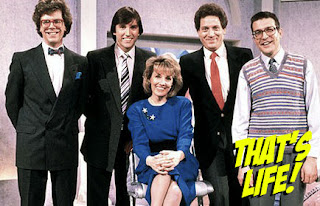 But you can never really enjoy the relaxation because of the guilt.

The guilt starts in childhood. Childhood is when Sunday evenings first start metamorphosing into the dreadful form in which they will be so familiar in adult life.

It all begins the first time you realise you haven't done your homework and that all that lies between now and the horror of school is That's Life, The Waltons and sleep. You can't even really enjoy The Waltons or That's Life because (a) they're not actually that good to be honest and (b) on some level you know that watching them is procrastination - if you gave them up (and let's face it, it wouldn't be much of a sacrifice) you might be able to go to your room and get that homework done and not be living in fear and dread the next day.  All you'd be giving up would be an hour or so of insipid television during which Esther would probably blink back crocodile tears whilst describing the fate of a terminally ill baby before handing over to Doc who would attempt to fill the gaping void in the audience's soul with a selection of vegetables shaped a little like genitalia and slightly amusing misprints. What you stood to gain would be peace of mind.

But of course you never did that. Watching Sunday evening TV as a child is the perfect illustration of Freud's Pleasure Principle, even though the pleasure is so attenuated as to be effectively absent. By seeking Pleasure (That's Life) and avoiding Pain (homework) one is merely putting off the inevitable for short term and largely illusory gain.

Freud called it the Pleasure Principle. Others might call it laziness.

In theory adherence to the principle is supposed to be something one outgrows in infancy but in practice it seems to last well into adulthood. The secret mantra of the twenty first century is "never do today what you can put off until tomorrow" and a lot of the time unpleasant tasks can be put off almost indefinitely by obeying the Id, Chief Advocate of the Pleasure Principle. There is an irony here; putting off these unpleasant tasks only results in a net increase in the amount of displeasure in your life. Not only is there a constant low grade background radiation of guilt gnawing at your consciousness, but often these minor chores, once complete and out of the way, would be a major contributory factor to an increase in the quality of life, with all the attendant pleasure that this might afford. Short term gain results in long term loss. So does such knowledge of the big picture help wean us off the Pleasure Principle?

Even though 99% of the time we know that we should be doing such and such and that doing it sooner rather than later will only lead to greater rewards in the long term, for some reason the demon of apathy reclining on the couch in the forebrain whispering that the path of least resistance is the best one is far more convincing. Easier not to... Even though any pleasure derived from taking the path will be soured by guilt.

Like the road to hell, the path of least resistance is paved with good intentions. I'll do it tomorrow. When I'm less tired. When I'll be able to concentrate more. Once I've got watching That's Life out of the way...

This attitude could have a major catastrophic effect during school days when what one was putting off often had to be handed in and judged the next day by sinister figures with what felt like the power of life and death over you. And didn't they just exercise it to the full extent that the law allowed with their criticism, censure and false "disappointment". And let's face it, it was false. When a teacher said they were "disappointed more than anything else" in you or your work you could always see the spark of glee in their eyes, the excitement that they'd been afforded the opportunity to indulge in a bout of spiteful condemnation.

And with an irony typical of this bloody universe, the things you really want to have done, the things which are most worth doing, are always the most difficult and frightening.

The only comfort is that at least That's Life isn't on the air any more.
childhood douglas adams journal psychology sleep stupidity tv