Dreaming of the Starlight: 4

What I really enjoyed back then about hitching around to see bands was being on my own. Nobody else seemed to understand that, for most people it was a social thing.  I on the other hand always got frustrated when I found someone else doing what I was doing - often before I knew what was happening I'd been pressured into travelling with people I hardly knew and having to hang out with and talk to them. This was unsatisfactory. You could never rely on other people.

This was another reason my 1994 Lush expedition felt so special. There was no-one else on the road. Sure the gigs themselves were packed, but the only other people experiencing all the gigs were the band and crew.

It had been so deserted walking out of Bath earlier that night I had considered lying down by the side of the road on a grassy verge and catching some shuteye, but I'm glad I didn't. In the end I made my bed by 4am and listened to my Split CD whilst falling asleep.

I woke up again at around noon. Even though at the time I was sharing a house with five other people, it was deserted. It was a quiet hot day. I made myself a cup of tea and listened to the CD again on the huge ghetto blaster in the kitchen. It was all fantastic stuff. 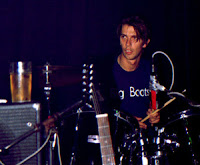 I had a bath and made my leisurely way into the West End and the London Astoria 2; a large basement club (that has by now no doubt been subsumed into the subterranean workings of Tottenham Court Road Crossrail station).  The guy on the t-shirt stall said hello and told me he'd been asked to give me something and held out his hand. It was one of the set of four postcards that had been produced to promote Split upon the back of which had been affixed a laser printed sticker informing me that I had been "invited to a Lush party" after the gig.

It got quite crowded in there that night. At the time Lush were the darlings of the indie scene and this was the first London date for a while. Wandering through the balcony (which oddly looked down onto the stage through interior glass windows) I spotted Steve Severin. 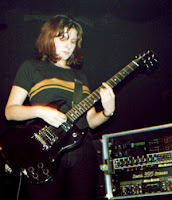 I don't have any clear memories of the gig itself as distinct from any of the ones that had preceded it during this busy week. This may partly be because I was almost psychotic by this point due to lack of sleep and too many stimulants. I remember feeling saddened that it was all over, but felt that on the whole I'd had a far better week than I could have hoped for.

Afterwards I wandered out into the street - I wasn't entirely sure where the Raw Club was. Also I wanted to get some cigarettes. Whilst wandering up and down Tottenham Court Road looking for (a) a newsagent and (b) the Raw Club I ran into the band plus entourage making their way from the venue to the club.

"Are you coming to the party? Have you got one of these?" Miki proffered another invite. I explained that I wasn't sure where it was and I ended up following them all down a side street and into a grim looking office building. However in the basement there was a night club. 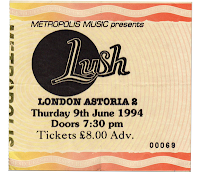 I spent a couple of hours there. Free drink! Nothing on draft as is the way with these things, but there were plenty of bottles. I chatted to Miki and Chris briefly over the course if the night although understandably the whole of the band was in demand by the great and the good so most of the time I contented myself with catching their eyes from a distance and flinging them the odd smile and acknowledgement.

Eventually I decided I had to go. Quite apart from anything else I was due in Cannock the following evening to sell merchandise which would mean a (relatively) early start.

I managed to attract Miki's attention as I was leaving as I wanted to let her and the rest of the band know how much I'd enjoyed the past week. It had been a breath of fresh air and the band were quite simply amongst the most genuine people I'd ever met with no pretentions whatsoever.

"Oh are you going? Give me your address, I'll write to you," Miki reached into her bag, looking for a pen. 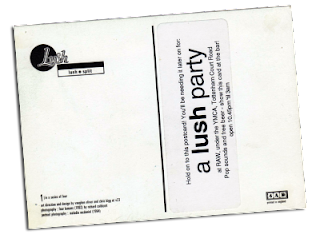 I told her it was OK because I had stickers with my name and address on.

"Brilliant I'll stick it on my make-up case," Miki took the sticker and did so. I wondered if it would last the night but decided it didn't really matter as I was sure she had far more interesting things to do than really write to me. I walked out and up the stairs. It was over but I was happy.

I hopped on a night bus at around 1.30am. I'd be back home within an hour which would give me ample time to get some sleep in before being due up and out the next day.

I was confused to wake up in the same bus at around 4am as it negotiated Victoria Station. Ah shit. I'd slept all the way out to Hainault then all the way back into Zone One again. By the time I eventually got home it was already light.

I still made it to Cannock, though.

I must admit I didn't expect anything else to happen. It had been a magical week - a holiday with a difference. I'd gone into the experience solely expecting to travel around the country and go to a handful of gigs by one of my favourite bands and had come out of it having met and chatted with them with a pre-release copy of their new CD into the bargain. Furthermore and most importantly they had turned out to be amongst the most friendly people in the music industry I had ever met.

So no, I didn't expect anything else and in September had forgotten all about it. Then I came home from work to discover a postcard from Bergen in Norway. Short and chatty it was signed Miki (Lush) although the parenthesis was unnecessary; I didn't know any other Mikis. I'd probably been feeling grumpy that week as usual because I seem to recall the postcard's arrival cheering me up considerably. She had written, it hadn't been an idle promise made in the drunken heat of the moment.

Come Christmas she sent me a card as well with an exciting PS - Lush were playing a secret gig at the Dublin Castle. Well of course I went. I drank far too much though. Silly ass. Still, I thought, there would always be more Lush gigs.

And there were. But fantastic as the gigs that followed were, nothing quite beat the Split tour. As a memory it is still quite distinct and discrete. A beautiful snowglobe with music inside.
many thanks to Mick Mercer for permission to use his Lush photos
journal lush memoir memory music