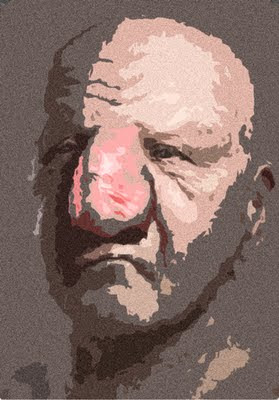 It's rather worrying that sometimes people get so desperate for fleeting moments of superiority over others that they'll stop at almost nothing to achieve them no matter how pathetic they end up looking.

Mr Clarke was one such person. A belligerent ghoul who made my life hell from 1976-1977, a so-called teacher who used to drink whiskey in the stationery cupboard between lessons as a result of which he had a large red nose which seemed to enjoy an existence quite separate from that of the rest of his face. He was almost universally hated because of his constant hectoring tone, violent outbursts against the more unruly elements in the class and sarcastic catchphrase "you just couldn't be bothered".

I suspect he knew very well just how much he was despised and feared, which is probably why he drank so much.  In retrospect he is an almost pathetic figure, but of course at the time I was terrified of him.

Years later when I first heard The Headmaster Ritual by The Smiths it was almost frightening how strongly a mental image of Mr Clarke was immediately invoked by Morrissey's lyrics:


"Sir leads the troops, jealous of youth, same old suit since 1962..."
Amongst other things, he taught us English, and one dull spring morning decided that he was going to teach us about the phenomenon of "Words Containing Other Words That Mean The Same Thing".

Well, we were all confused but intrigued. We'd never heard about such words, but then again that was what English lessons were for wasn't it? Teaching us the differences between nouns and verbs, adjectives and adverbs. I wondered what this special class of self containing recursive words would be called...

I thought I could and put my hand up.

"Inflammable and Flammable, sir," I said when I had been given permission to speak.

"Nonsense, boy, they mean the opposite of each other."

Now the thing is I knew that they didn't mean the opposite of each other. They meant the same. Something that couldn't burn was Uninflammable, whereas both Inflammable and Flammable meant caught fire easily. I pondered for a moment throught of another one, and put my hand up.

The problem of course lay in the fact that Mr Clarke thought he had bagged the only two words that fitted this arbitrary, coincidental model and was enjoying flexing his superiority over a room full of ten year old boys. The last thing he'd been expecting was that one of those boys would upset this idyll.

I suspect it was one of the many reasons he hated me so much.
bullies childhood english memories school teachers