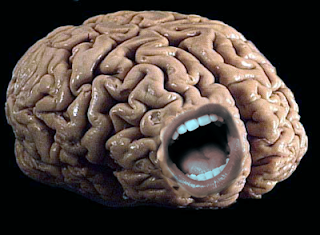 This week I started cycling into work again for the first time in ages. The weather had improved, it was no longer even remotely cold and I basically couldn't come up with any further ways of putting it off. Leaving early it wasn't nearly as bad as I feared it might be, but on the other hand it did remind me of something about the way my brain works.

During the cycle journey I am fully physically occupied. My brain is also very busy; calculating a trajectory here, making sure I obey the traffic lights there and ensuring I don't end up under a juggernaut due to a miscalculation whilst shooting round Vogue Gyratory.

However these activities don't entirely occupy the brain. Whilst they're not unconscious autonomic responses they are below the threshold of language, which means that throughout the journey my thought processes are racing and my internal madman is monologuing at a million miles an hour coming up with reams of subvocal garbage and the odd gem.

At one point last week for instance I spent about two and a half miles obsessed with the idea that David Bowie would do a cover version of "Who Do You Think You Are Kidding Mr Hitler?" changing the lyrics to "but he comes home each evening and he's ready with his bloody gun". This thought then led to my wondering about the exact nature of Mr Brown's employment. I assumed that him going off to town on the eight twenty one was a reference to him commuting. Seeing as the imaginary town of Walmington-on-Sea was supposed to be on the Kent Coast (somewhere along from Hastings or Bexhill) then even if the train service was better during the Second World War than it is now, he still wouldn't be in the office before ten am and that is assuming that he worked somewhere near Waterloo.

It seemed odd to me.

This is a fine example of the kind of old bollocks that my brain gets up to when the intellectual side is free from stimulus. Some people listen to their iPods whilst cycling, but I can't imagine anything more dangerous. I am such a cautious cyclist that I need all my wits about me and my ears, although a bit crap these days, are still a potential early warning system.

So free from any intellectual stimulus whatsoever my brain races like an engine that hasn't got a load and comes up with all sorts of stuff. This may be a useful and healthy thing to do from time to time and the fact that I find it enough of a novelty to write about indicates just how distracted we get these days by the constant stimulation of the multiple streams of data we have pouring into our heads.

Don't get me wrong - I'm no luddite and think that the information age in which we are living is a marvellous thing. The combination of the internet and the smartphone means that in theory the sum total of human knowledge is instantly available to us at all times - and this can only be a benefit to us as a species. However, these constant streams of data are supernormal stimuli, new ways to get hooked and I do think we need to take some time off occasionally. It is tricky of course but then again so is something else that's good for us - dieting.

Much as a sudden supply of food might encourage gorging and obesity after years of rationing and austerity, the data rich environment in which we now find ourselves means our intellects are at risk of getting unfit.

If we're not careful we're all going to end up getting very fat. Brain fat.
addiction brain consciousness mind writing

Louise Halvardsson said…
"brain fat" is a brilliant way of describing it ... we need more free-flowing thoughts in the world ... I always try to go for a walk/run without distractions like my phone and iPod to free my mind a bit ...
Sunday, May 15, 2011 10:28:00 am