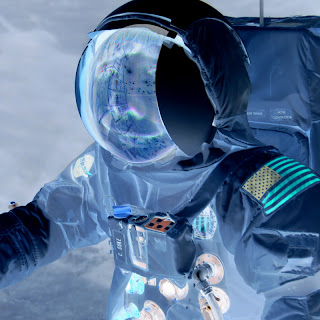 I just entered a competition the first prize of which is a journey into space.

I am under no illusions about winning, but it is nice to have these little possibilities hanging there in the back brain giving us cause to imagine just how wonderful would it be if only... Millions of people do the National Lottery every week for instance and the chances of winning that are far less likely.

And of all the things I really want to do, number one by a long way has always been leaving the planet, if only temporarily. I dream about space travel on a regular basis and am eternally disappointed in the non-arrival of the future that was promised us in our childhood. OK so we have a different future, an amazing one that we could never have imagined back in the seventies. The internet, a whole extra dimension, has been added to human experience in the most significant technological development since Gutenberg and yet...

It's not as good as space travel, is it?

Those of you who have been reading this blog a long time might recall a short entry about two years ago bemoaning the fact that the future had been stolen. I'm going to cover some of that ground again here, although going further than I did last time. But the story of my expectations of space travel go back a long way.

The competition I mentioned above is not the first one I've ever entered that had a fabulous almost mythical prize. Back when I was five or six there was a competition I entered (well, my parents entered it on my behalf) the prize for which would be a trip to Cape Kennedy (as it was then called) to watch the launch of the next Apollo mission. 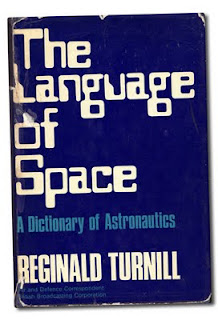 I seem to recall it wasn't a piece of piss like the kind of competitions they have today. None of this Mars is (a) a planet (b) your mother's house (c) the Roman god of chocolate. The competition had loads of questions and was several pages long with very small print like a benefit application form. In a bid to make sure we answered everything correctly my parents even bought (me) a book called "The Language of Space" by Reg Turnill, a book I still have today.

Some of it makes interesting if depressing reading in retrospect, especially the chapter THE NEXT 20 YEARS IN SPACE. Skipping ahead ten years from publication:

1980
Space Shuttles, carrying 12 men each, expected to reach launch rate of 100 per year. Space Station module to be landed on moon as part of first permanent lunar base.
1981
Earliest possible date for U.S. manned mission to Mars - unlikely to be be achieved; but this could be the year that the Soviet Union launches an expedition. Saturn Orbiter to be launched.
1982
Mercury orbiter to be launched.
1984
Moonbase now built up to 25 men.
1986
Most likely date for first U.S. manned mission to Mars, using Space Station modules as crew quarters, with nuclear rocket stages (probably 3), and a Mars Excursion Module. Moonbase build-up reaches 50 men.
1987
Manned fly-past of Venus by returning Martian expedition.
1989
100-man Space Base in Earth Orbit.

These predictions were made in the heady post-Apollo days when the technical achievements depicted in 2001: A Space Odyssey were considered a conservative estimate, but it's sobering to realise how little of this we have achieved even today - at least we managed Cassini and MESSENGER even if they were twenty to thirty years late.

At the time I believed every word of it of course; I knew it was going to happen. I was really excited about winning this competition as well. It was something big that was also going to happen. I built up all sorts of dreams and fantasies around it, including somehow sneaking into the Apollo capsule and stowing away to the Moon myself. I remember excitedly recounting the details of the competition to Mrs Kelly, a wizened dinner lady with a sour outlook on life. When I mentioned that my parents had helped me with competition questions, a supercilious look crossed her face.

I didn't think I'd cheated. Besides, when I won my parents would be going to America with me, wouldn't they? The only thing that now stood in our way was the final question. A "tie-breaker" and we had to complete the sentence:


"I would like to visit Cape Kennedy because..."
In the most apt and original way. Eventually end my parents decided on "...it is the gateway to the stars"

In retrospect a somewhat cheesy answer, but I still live in hope that it will one day become true, despite July 2011 marking the date of the last planned launch of a manned mission from the facility.

If I'm lucky it will become true within my own lifetime.
Next time: Moon Mania
childhood future journal memoir memories space