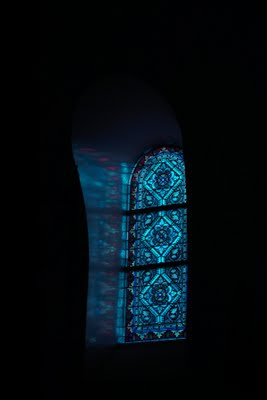 I wonder whether they still get children to memorise poems in school?

I used to find this terrifying. At that age I hadn't heard of the memory techniques that make such feats easier and as such used to struggle. One of the ones I recall having the most trouble with began "I must go down to the sea again...", but to be frank I don't think I can be blamed for this failing. Besides,  the protagonist of this verse sounds arrogant and demanding:

Oh, that's all is it? An enormous vehicle just given to you, gratis, and then you actually want a celestial body some light years distant to be simply handed to you on a plate simply because you haven't got any idea where you are going?

Repetition seems to be the key to remembering something and as such the only poem I still remember is the one that was drummed into me on a daily basis for as long as I went to school. No doubt you know it too. The Lord's Prayer.

There was always something unpleasant and puzzling about it. It didn't make sense. It didn't stand up to close scrutiny, a characteristic it shared with its host belief system.

Our father who art in heaven...

OK, that bit was fine. Kind of like an email address; ourfather@heaven.com. I wasn't entirely happy with God wanting us to call him "Father" when according to him he'd made us out of dust, but I supposed that it was a kind of admission that the whole dust thing was a bit weak. Plus "Our manufacturer..." didn't quite have the same ring.

Hallowed be thy name...

I didn't get this; being too young to understand the concept of "to hallow" I figured that this simply had to be one of the many names of God, the one we happened to use in this prayer. Like an old fashioned version of Harold.

This is where it started to get sinister. Quite apart from the sentence structure making a nonsense of the whole thing, the three words painted an unmistakable picture of approaching menace. You'd better watch out, Harold's kingdom is coming. I got a distinct impression of evil castles hiding behind clouds, ready to jump down to Earth and get us.

I was sure there was a word missing here. We were reassuring Harold that his something would be done, but what? Thy wishes will be done? Bit sloppy to have missed a word out here and even sloppier to have continued missing it out over centuries.

On Earth as it is in Heaven

Kind of saying "As above so below" which was fair enough but it seemed a bit of a non-sequitur. Perhaps it meant that whatever it was of Harold's that we were supposed to be doing in the previous bit was supposed to be done in both Earth and Heaven. Fair enough, although surely what went on in heaven was his department.

Give us each day our daily bread

Now that I did understand. A brown sliced loaf. But as far as I was aware my parents always bought the bread. I'd never seen any god-bread. Perhaps it was for grownups only?

It was also at this point that the whole tone of the prayer changed. Up until this point we'd been sucking up to Harold in a "You're great and we'll do whatever you say" manner and then without so much as an indication of a gear change we were demanding bread. It got more extreme in the next two lines.

Now we're telling Harold to do as we do. We're not going to be like him, he has to be like us. You must forgive us, because look, we forgive other people.  For trespass, anyway.

The only other place I had come across this word was on notices informing me that I must not trespass upon the railway, and so this couplet conjured up images of lines, sleepers and pumice gravel. Did God have a railway that we were often naughty enough to trespass upon? Were we trying to make him think that each of us too had a private railway upon which people were constantly trespassing?

And lead us not into temptation

Now we're suggesting that Harold might be a bad influence on us and admonishing him for this. This line suggests that if there is any temptation around we probably won't succumb unless Harold leads us there. Naughty Harold!

But deliver us from evil

Another demand. Now we are casting Harold in the role of a moral postman. But it was the final bit that used to worry me the most.

For thine is the kingdom
The power and the glory
For ever and ever, amen

I thought of these final lines as the "bad bit" because my mum, who had been brought up in a convent, got annoyed that this bit had been tacked on. I thought of it as somehow like apartheid and like the British army in Northern Ireland - one of the bad things in this world that shouldn't be allowed, but were being forced upon us.

And there we were being forced to chant it every day. It's no wonder I ended up an atheist.

Sally Fink said…
When I was in school we had to memorise Owen's Greater Love and Marvell's To his Coy Mistress. Still remember every line to this day.
Friday, August 05, 2011 12:32:00 pm