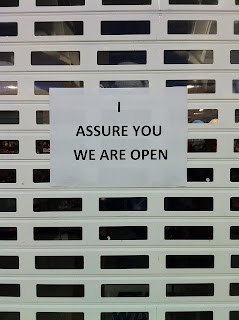 I was interested to read today's Guardian article about the journalist who was stopped from writing down the prices of items in Tesco so much so that I even made a comment below the article. I had assumed from it and from some of the other comments that followed that photography would be even less welcome in Tesco stores and wondered what this meant for the manufacturers and promoters of goods who have started putting QR Codes on their products in the name of marketing.

Still, I thought, it's only Tesco.

However, a couple of hours later I was to discover that this attitude was more widespread than I thought. I was passing through Churchill Square Shopping Centre and spotted a mildly amusing notice on a shop front which, as is my wont, I took a snap of. See above. I was immediately accosted by a security woman who told me that I wasn't allowed to take photographs.

I was so taken aback by this that I stood there for a few seconds before walking across to where she'd retreated and asked her what this was all about. I would just like to make clear at this point that the entire exchange was conducted in a civilized and polite manner; I saw no reason to become confrontational and to her credit she answered reasonably and truthfully even if substance of what she was saying didn't entirely add up. At no point did she over-react in the way that the Tesco staff allegedly had and claim what I had done was illegal.

She explained that it was the policy of the shopping centre not to allow photography.

I pointed out that as I wasn't employed by the shopping centre I wasn't bound by their policy.

She said that by coming onto the premises of the shopping centre I was tacitly agreeing to be bound by their policy and that if I didn't want to agree to this, I was at liberty to leave.

It sounded odd to me, but I was prepared to accept it. But did you know that when you walk into a shopping centre you could be agreeing to rules and regulations thought up by the shopping centre that don't necessarily apply in the outside world? Well apparently so. It's just as well that it wasn't also their policy that customers had to walk around backwards with one eye closed.
She also explained quite reasonably why it had to be a blanket ban on photography (as they weren't allowed to discriminate) and I would like to think that in the end we agreed to disagree - I pointed out how I believed such measures were the thin end of the wedge when it came to the erosion of civil liberty and she opined that she thought they were necessary.

But it's odd how the "prevention of terrorism" mantra is chanted whenever our civil liberties are undermined in this manner. Now I don't know this and I don't have any facts and figures available to support my belief, but I would be very surprised if there is on record any instance of a terrorist act being carried out as a direct result of people being allowed to take photographs in non-sensitive areas such as shopping centres or city streets. However there are examples I can think of in recent years when public photography and/or filming has brought the abuse of civil rights into the public eye. The prevention of such public scrutiny of corporations or government employees is in my mind far more likely to be behind the introduction of any anti-photography laws or policies.

I wish I could remember who said this, as it has become one of my favourite quotes of the past couple of years:


"if the government had understood what the internet was in the first place, they'd never have let any of us near it"

Citizens are now walking around with television studios in their pockets. Small wonder that the casual abuse of civil liberty commonplace in the past is now considered unacceptable - it's far more difficult to get away with. And so, just as the primary concern of Health and Safety is neither health nor safety but litigation, the primary concern of any so-called anti-terrorism legislation or policy could well be addressing this unexpected freedom of information and communication that the citizens now have.

Who watches the watchmen? No-one. It's illegal.

From which of my sites would you prefer I pimp yours? I am happy to link to them from the "My Blog List" panel on the catmachine.eu blog site in the event that people are arriving at my blog having searched for your music.

Alternatively, I could link to them from catmachine.org which is my record label if you think this is more likely to attract hits.

G O D said…
Either or both is fine! Thanks a lot my friend. There is also some girl selling jewelery under the name Cat Machine.Thanks again G O D
Wednesday, September 28, 2011 12:50:00 am