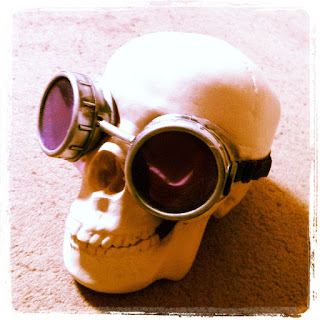 As a child I was absolutely terrified by skeletons in general and skulls in particular.

I am curious now as to where this fear sprang from. Of course skulls are associated with death but as a very young child death is something you are blissfully unaware of. Is the fear of the skull something built in, an instinct that evolved over time or is it something that is learned?

Very young children do learn to recognise faces very early on, and smiles in particular. You would expect that a baby's instinct upon being presented with a skull would be to smile - the skull is, after all, a very simplistic representation of a smiling face. One way of testing this would be to experiment with babies and pictures of skulls but this could very well turn out to be unethical and cruel should the findings of the research be that that a fear of the old bone face is not learned but is in fact built in...

It could well be built in. In prehistoric times human bones would generally only be found in dangerous places like a lion's larder. They'd also be found in situations where an entire tribe had been wiped out by contagion - Thugg the Caveman and his band of foragers would do well to steer well clear from a valley in which they discovered that the human inhabitants had died so quickly that they hadn't a chance to bury their dead.  Fear is a much better enforcer than a mere sign saying "keep out" which explains the presence of the death's head on warning notices to this day. Like the colours yellow and black the skull may be an icon of fear that is wired into our brains.

If it is learned then it must be learned at a very young age. The appearance of skulls in visual media associated with frightening situations might do it, but this would take time. To gather that a skull is a bad thing a child would have to watch a lot of TV and read a lot of picture books with skulls in them - and I think this simply wasn't the case with me.  If anything books aimed at children make a point of avoiding the depiction of skulls - as a slightly older child I was relieved that Hergé appeared to have gone out of his way to not draw a skull in The Adventures of Tintin book "Destination Moon" even when illustrating a clever slapstick sequence involving the Thompson Twins, an X-ray machine and a skeleton.

I am inclined to think that fear of the dead is part of our instinctive makeup.

As a child I recall one of my peers saying that like me she hated skeletons. However she had absolutely no idea that a she had a skeleton inside her; she just thought that they were frightening creatures like vampires, werewolves and frankenstein monsters, a mere entry in the dramatis personae of dread.  I clarified matters for her and once she realised that I didn't mean she had a small bony imp running around insider her but that a skeleton was in fact the scaffolding upon which she'd been built, she seemed less scared.

This didn't work with me. If anything it used to scare me more. I used to play chicken with myself in front of the bathroom mirror, running my fingertips along the ridges of my eye sockets and cheek bones, pulling faces to discover which expression most revealed the skull beneath the skin. I'd then rush towards the mirror pulling this face in order to see who'd flinched first.

Like all fears, my fear of skulls gradually started diminishing as I reached adulthood. I now have a plaster skull on the shelf above my computer which is in the same room in which I sleep. This would have been unthinkable as a child when I couldn't even bear the thought of a picture of skull in a book on the shelf in the same room in which I slept.

I would like to think that this diminishing of fear is a case of overcoming our instincts. Our instincts may have been very useful in getting us where we are today but they're now standing in our way. Overcoming skull fear is just a start.