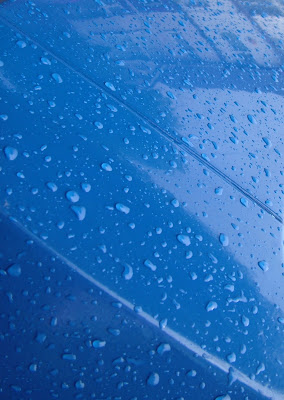 When the weather is bad - especially when this involves wind and rain - my initial reaction is that I want to punch god in the face. There are a couple of rather big problems with this urge.

Firstly I am not by nature a violent person and if I ever did end up planting a fist in someone's face I'd probably feel bad about it for years afterwards.  Even if I could conquer the guilt, I still couldn't cope with being in a fight because I'd get my arse kicked.  Even if my opponent wasn't an omnipotent being who created the universe.

This brings us to the second of the big problems.  I don't believe in god so the urge would be impossible to carry out even if I worked out for months and took a course of empathy removal drugs.

The urge is still very strong though.  I think it's based on the raw anger I feel when confronted with weather of this kind.  Logically of course there's no reason to get cross about something beyond human control and normally I remain philosophical about such acts of god. The fact that god doesn't exist should encourage even greater phlegmatism.

But there's something about wind and rain that makes my blood boil.

I don't even have to be caught in it to lose my rag, it's enough to hear the rain clattering against the window like a handfuls of gravel tossed by unruly children. In fact it's mainly the sound of rain on glass that sparks off the most godpunching of urges.  Getting caught in the rain itself isn't nearly as bad and can sometimes even be laughed off.

My bed is beneath a skylight.  On a bad night I can lie there for hours unable to sleep and fuming into the darkness.

The fact that it's the sound that bothers me the most is significant. Perhaps I am not just an irrationally short tempered fool - a condition known as Misophonia or more clumsily Selective Sound Sensitivity Syndrome (SSSS) describes my annoyance to a T.  The irrational anger such sounds can engender; the way it's made far worse when one is exhausted, run down or ill. The only thing that doesn't quite seem to gel is that misophonists find themselves made the most angry by the noises made by people rather than nature.

This is not to say that I don't find the endless clicks, pops and subconscious beatboxing uttered by the human race at large maddening - and once you notice them they're everywhere. The bus driver. People in shops. Teachers. Policemen. Doctors.  But there's something altogether far more relentless and infuriating about the sound of rain. I have taken to wearing earplugs when it gets very bad, but the problem then is that I don't hear the alarm clock going off in the morning. In the long run I think I'm simply going to have to move somewhere where it isn't a problem.