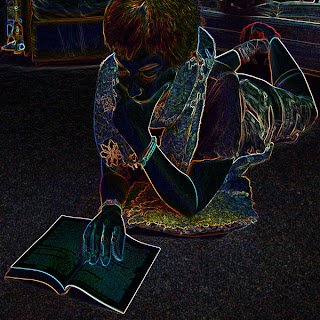 This morning as I dragged myself out of bed early for the first time since the seasonal break I seriously felt that the weather was taking the piss.

It was the day that I was due back at work and as such already had a level of terror normally reserved for a visit to the dentist without anaesthetic. The fact that it now sounded as if there was a force ten from navarone blowing out there was merely the cyanide icing on an already unpleasant and slightly rotten fruit cake.

If this had been fiction I would have concluded that this was the Pathetic Fallacy at work and that the weather was reflecting the mood of all the people in the land as they were returning to their places of work; the appalling weather itself then serving to sour these self same moods even further in a furious feedback loop...

But there are few authors who could get away with this kind of thing these days. If you or I had penned this morning and then brought it along to a writers' workshop we would probably be told not to be so cliched and to go back and rework that passage, perhaps putting in some ironic sunshine and unseasonable warmth just to mess with the heads of our characters and make their return to the grindstone that little bit more unpleasant.

But that's reality for you. It so often confounds narrative conventions and comes up with plots so thin, characters so transparent and reversals of fortune so ridiculously unlikely that there's no way god would stand a chance of getting it published and would in fact still be on the rewrites of the late nineteenth century and only then if he had really been putting his mind to it.

People may laugh at the complicated and contradictory story lines and unlikely plotting of soap operas such as Eastenders but these are as nothing when compared to real life.

We are of course as I have mentioned many times before, ultimately the stories we tell ourselves. Perhaps life might seem complex, confusing and poorly written as we live it but after a while once we've committed it to memory and then spent enough time revising it and coming up with the definitive version, the director's cut, things all seem to make much more sense. The fact that other people might not agree with our version of events is of little importance - it's our story, it's told in the first person, it's told frequently and ninety nine per cent of the time it's told to an audience of one. Ourselves. Perhaps inside our heads we are all George Lucas messing with the original Star Wars films - and just like George we all believe that our past is all the better for it.

After all if we are going to be the protagonists of our own tales, there's no sense in not giving ourselves the best parts. We can be heroes.

This is why nostalgia can be so powerful. The past has had more time spent on it and as such is often better written.