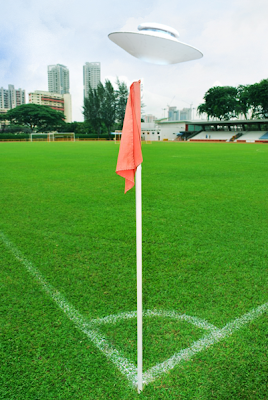 I used to read newspapers more often than I do now, and back then I noticed a curious phenomenon.

Most newspapers had two distinct identities.

There was the main bit then at just over the halfway mark the quality of the content quality started degrading as it became predominantly ads, cartoons and crosswords. Then just impenetrable ads for increasingly bizarre products and services.  But if you persevered you would break free of this cruft and into another section of the paper altogether with stories and articles. It was like discovering a hidden city at the centre of the jungle.

The problem was this new section was concerned entirely with sport.

I was never interested in sport so as far as I was concerned this part of a newspaper's anatomy was analogous to the appendix. It didn't do anything and could safely be ignored. At times of World Cup or Olympics it did seem to become seriously inflamed but there was nothing really you could do about this.

The option of a sportless newspaper has never been countenanced. Merely suggest such a thing and your fellow human beings would probably look at you as if you'd just proposed breathing without oxygen; persisting in this suggestion would be enough to get you carted off the funny farm babbling about art and culture.

Because everyone else loves it. I've never understood why sport is held in such high esteem compared to, say, music or literature, but that's the way the world is. Whilst the sports section seems a waste of paper to me, there are people who are interested in it and far be it from me to say they can't read about what they love in the paper. Nevertheless, the prominence it is given is simply staggering - and on a day when a big sports news story breaks it will be all over the front and the back of the paper. I mean, there are things that I'm really interested in like space travel and music, but that doesn't mean I'm under any illusions that they'll ever enjoy the level of coverage currently enjoyed by sport, because more people like sport than like space travel, making the inclusion of a lengthy sports section in most newspapers a more reasonable proposition than a space travel section.

However, there are some people who are only interested in the sports pages. You most frequently see them on public transport, or at least it's their behaviour there that most easily gives them away. Usually male, he swaggers into the carriage and drops down into one of the seats. If there's a newspaper on the table you see him clocking it with acquisitive eyes.

This in itself is perfectly reasonable. Everyone wants something to read when they're travelling and a discarded newspaper is an irresistible draw. It's free and often not something that you would normally consider buying. The distributors of the Metro and other free papers have done very well in this niche of late. If you ever want to implant an idea into the imagination of city dwellers across the country all you'd need to do is get coverage in Metro. Never mind last night's TV, these days it's the derivative and frankly unbelievable stories contained therein that are the talk of the water cooler.

But I digress. Usually it isn't Metro that has been abandoned on a train for Mr Sport to pickup. often it's the Sun, the Mirror or the Mail, something small and tabloidy. Something easy to grab as Mr Sport now does. He then invariably flips it over to the sports page.

It doesn't matter what is on the front page. It could be a massive earthquake in China with thousands dead, a new war in the Middle East, draconian new legislation from our government that makes it illegal to talk in public, alien invasion, the discovery of time travel or proof that ghosts are real.

Nah. He wants to read about the football.

It's another world and one I suspect I will never understand.
journal people psychology sport

Luke said…
Ha! When I commuted to London it ALWAYS drove me mad to see folks picking up a paper and doing exactly that. As someone that couldn't care less about most sports, and even the one sport I am interested in I'm not THAT interested in, I just don't get it and also find the creep of sports news into main news annoying.
Friday, March 16, 2012 9:59:00 am