You don't fool me

This has never been more true than online. Modern social networks are the ideal arenas for making jokes, puns, plays on words or other frivolous observations - things intended to raise a smile but when it comes down to it fairly disposable and transient. However, when doing so there's nothing more disheartening than getting a response from someone who has taken it seriously.  Sometimes they even find it necessary to point out or explain the joke you've just made (taking credit for it themselves in the process almost as if you'd said it by accident). Sometimes they completely miss the point. On other occasions they respond by making the same joke you've just made, just less subtly. 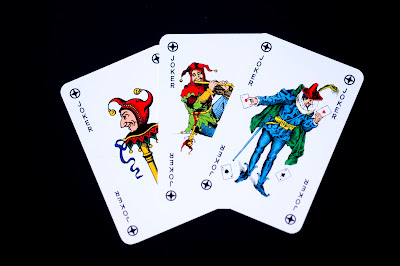 Why is this behaviour so prevalent in the electronic age?

For a start it might not be.  I might only think it is. It's fair to say that I can be a bit of a recluse and that as a result I'm now meeting and interacting with far more people electronically than I ever did in my previous incarnation as an exclusive inhabitant of the flesh and blood world. So it could be argued that I am simply coming into contact with a far wider selection of humanity than I did before and that this will by definition contain some people who occasionally Miss The Point.

Or on the other hand it could be something to do with the nature of the medium itself. When we see something printed - whether on paper or on screen - in our minds it immediately takes on far more authority than perhaps it deserves. After hundreds of years of the authorities having sole control of the printed word the fact that we all now have this power still takes some getting used to. People can be forgiven for being taken in.

Of course I get taken in too, albeit on occasions when the idea is that people should be fooled. There was an April 1st spoof in the Guardian some years back the point of which I completely missed at the time.  I didn't read it for several days so the date was no longer around as a clue that it should be taken with a pinch of salt.  It concerned Coldplay's surprising support of the Conservative Party and how they were planning a "Blue Wedge" style series of concerts in support of Cameron.  I came away from this piece with a dislike of Coldplay (whom I knew next to nothing about at the time) which lasted for years. It was only much later when getting into a discussion on Twitter about why people hated Coldplay so much that I revisited this and discovered that I'd been taken in hook line and sinker. Ya got me, Guardian.

I've never been that keen on this kind of thing, anyway. Being fooled isn't the point of comedy as far as I'm concerned.  Parody on the other hand... well, I think parody's great. There's nothing quite like a well constructed piss rip of something, and the more I love the original the more I enjoy the parody provided it is well observed and obviously written and performed by someone who knows the original source material as well as I do. But the point of parody isn't to try and make me think it was the original thing and then after ten minutes leap out from behind a rock pointing a finger and laughing at me. That's not comedy at all - except from the point of view of the perpetrator who gets to feel superior about themselves for ten minutes. I don't imagine that kind of thing would go down too well at an open mike night.

Unfortunately the date upon which it becomes acceptable to do this kind of thing is fast approaching. Still, those who live by the fool will die by the fool - many seem to have forgotten that any pranks must be played before the stroke of mid-day or the joke rebounds upon the culprit. So keep this little ditty up your sleeve for the occasion: