When I was a kid I thought that weeds were actually a specific variety of plant - the evil kind as it were - and that we had to fight them at every turn to prevent them taking over the world as they strangled and replaced the good plants. Then when I discovered that it was only a human definition it felt incorrect to me, wrong, and I could no longer accept it.

No plants are "weeds" - who are we to say they are?

Similarly, the judgement of certain kinds of animal that some people make, calling them vermin or pests sits equally uncomfortably with me. Who are we to judge? Just because their behaviour doesn't fit in with our plans - with our own animal behaviour - doesn't mean they have any less right than we do to display it. 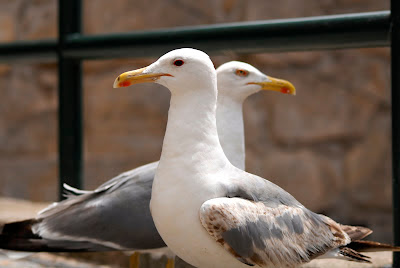 A common instance of such unfair judgement is when you hear pigeons described as "flying rats"; the implication being that they are worthless vermin and that our natural inclination to admire and wonder at birds should be discounted in this instance because they are filthy and stupid. No they're not. They are what they are, and like all animals they respond to their environment over time.

What is wrong with rats anyway? Their name seems to be a byword for all that is despicable and undesirable in the natural world. Some months back I was unfortunate enough to share a train carriage with some self important prick who was holding forth to his companion - a woman who didn't seem to be able to get a word in edgeways - about what a pest squirrels were and how people who thought they were cute were fools being taken in by these machiavellian rodents.

"They're just rats!" he maintained loudly, "Rats with tails!"

As opposed the the common manx rats we're all used to I suppose.

Rats are amazing and adaptive animals who seem to be able to not only survive but also thrive in any environment. The main negative connotations rats have are due to their ability to make the most of the world that human beings have created. They respond to their environment and over the last couple of millennia the environment has been shaped for good or ill by the human species. We made them what they are today - there are no sewer rats without sewers - and any disgust that human beings feel when faced with a specimen of Rattus norvegicus is therefore thinly disguised self-loathing.

If any other species had spread itself so widely and so densely across the surface of the planet as human beings we would be talking about an infestation. Never more than six feet away from a rat? Perhaps, but travelling on the London Underground at rush hour it's not the potential rodents within a couple of metres that are the trouble. It's the sweaty apes pressed right up against you thinking only of themselves as they push you aside in their desperation to get there first.

Any animal that can cope with such an infestation of Homo sapiens and turn it to their advantage should be admired.

Take the European Herring Gull, a common sight here on the south coast. Whilst their natural habitat may have been the cliffs and crags of coastal northern Europe they seem to have taken to urbanisation like pros and are capable of outwitting not only the other birds in the vicinity but even the human beings who share their habitat.

The funniest thing is when they steal food right from under someone's nose - this is very common on the university campus up at Falmer and there are certain locations in which if you sit down and watch for five or ten minutes you are almost certain to be rewarded with a couple of minutes of physical comedy.

It usually starts with some gangling lad or besuited academic emerging from the shop, tearing the wrapper off his sandwich, so keen is he to get the contents down his gullet. The patiently waiting seagull spreads its wings and after a moment or two of internal calculation launches itself on a carefully planned trajectory. They approach the target from behind and more often than not snatch their prize from the surprised victim.

Sometimes the victim sees the funny side of it - "I've just been mugged by a seagull!" they tell their friends and you can tell they'll be dining out on that one for a few weeks. They'll also think twice about eating whilst walking along as well.

But more amusing are the ones who are annoyed. The self important older males who have just seen their pomposity punctured by a member of another species. They stomp off with faces like thunder, clearly more annoyed at their perceived loss of dignity than their actual loss of lunch.

And sometimes people just shout "Fuck off!" which I don't think the birds understand.