July 09, 2012
There seems to be an inherent impatience in the heart of humanity. 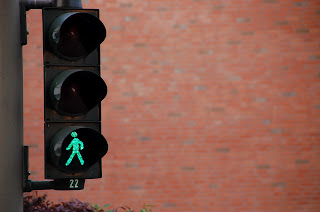 You only have to be waiting at a pedestrian crossing to see it in action. Generally when I'm waiting at a Pelican (a bad portmanteau of PEdestrian LIght CONtrolled apparently) crossing I wait for the lights to change in my favour, no matter how empty the road is. You never know when some maniac is going to come tearing round the corner.

Plus if there are young children with their parents waiting at the crossing I feel it's preferable to set a good example. After all, the parents are trying to drum a bit of road safety into their children's brains, brains which tend to see things in more of a binary fashion - things are either wrong or right. The last thing they want is another adult inspiring awkward questions about the important lesson they're trying to teach.

"But Mummy, why is that man crossing when the red light is showing?"

As I stand there motionless beside an empty road some people look at me like I'm insane, but I'd rather be insane than sorry.

Sometimes the level of traffic is such that dashing across against the lights isn't an option. When this happens, the impatient often take their frustration out on the button controlling the lights. The button on the little WAIT box bolted to the post.

If not illuminated these are intended to be pressed to indicate that you want to cross. This will, after a suitable delay which depends upon the last time the crossing was used, change the lights in the pedestrians' favour.

Pressing it repeatedly when it's already illuminated has no effect other than making the presser look like an impatient twit.

This is not the only situation when this behaviour can be observed. It happens even more when using lifts. Repeatedly pressing the already illuminated button for your floor every time the lift stops at another floor not to your liking will not get you there any quicker. Don't worry, the lift isn't going to forget your selection.

Unfortunately with lifts there are more buttons which, if misused, allow for the possibility of delaying your journey even longer - the very last thing an impatient soul wants.

This happens before embarkation. Unless on the bottom or top floor of a building there are usually two buttons - one for up and one for down. The impatient will of course press both - perhaps in the hope that they will be able to browbeat the lift into going where they want despite it having originally been heading in the opposite direction. 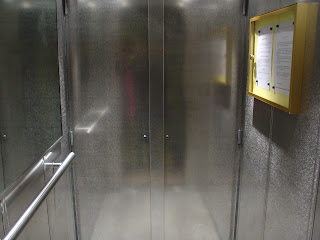 Of course this doesn't work. Mr Impatient wants to go down but presses both buttons anyway and boards an upward bound lift. He is puzzled by the fact that no matter how many times he presses the button for the ground floor the lift keeps going up, stopping at floors he doesn't want at which people he doesn't know get off or on.

Then, when it finally starts heading down again it stops at his original floor to reveal an empty corridor before heading down to its final destination. He could have saved himself time and a lot of frustration by only pressing the down button in the first place.

Yes, time is precious, but that's all the more reason to savour it.
behaviour impatience journal people