Curiosity's always been my downfall...

I am pleased to see that the Curiosity rover landed safely on Mars after such a long journey. And having seen simulations of the landing itself I'm impressed with the technology involved - the rover was winched down to the surface from a hovering descent section. That's a far more exciting and suitable example of unsupervised robotic drone technology than some I could mention. 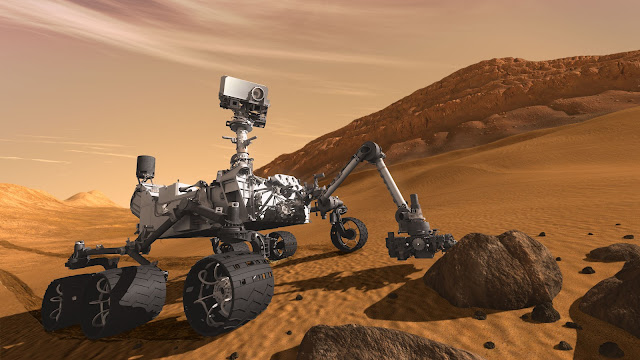 I hope we can look forward to at least five years of planetary trundling and would like to think that in my lifetime I'll see TV pictures of Curiosity being retrieved by the men and women of the first human mission.

Of course every time something exciting happens in the space programme there is a backlash from people who think the money would be better spent curing disease and feeding the hungry. Whilst I  applaud and share the core sentiment - who doesn't wish the sick cured and the starving fed? - as soon as I start unpacking this assertion I find it's riddled with flaws.

For a start there is the whole issue of important scientific spin off from space research, and I'm not just talking about non-stick frying pans. I won't go into this in great detail as it is often the space fan's first comeback to such accusations, but it is worth mentioning that it's unlikely we'd have MRI scanners without NASA's exciting adventures in the 1960s.

Another problem with this approach is the idea that science has to have a timetable. We can't decide the order in which things are discovered or put some advances on hold until we've finished others. Science is an organic and evolutionary process, with avenues of exploration leading to all sorts of unexpected areas. Some of which will benefit humanity enormously and may well ensure our survival in the long term.

But for me the big issue is why space exploration has to take the rap for wasting money which could be spent more profitably elsewhere. This smacks of scapegoating.

In 2007 the NASA budget was $17bn. This is an amount not to be sniffed at - until you realise that in the same year the US government spent over $615bn on defence. That's over thirty six times more spent on new ways to kill people and invade their countries. Just think what that could do for the poor and sick.

To focus even further in on this aspect - which I think is fundamental - consider the fact that each individual B2 Stealth Bomber costs $2.2 billion. Per fucking plane. The entire Mars Curiosity mission cost around that.

This perspective brings to mind the way the UK Government are blaming the economic woes of the country on so-called "welfare cheats" when the real causes are issues such as tax avoidance by rich companies and the like.

Blaming the space programme for a lack of medical advancement is a distraction from the real problem, which is this.


"Here's what you can do to change the world, right now, to a better ride. Take all that money that we spend on weapons and defence each year, and instead spend it feeding, clothing and educating the poor of the world, which it would many times over, not one human being excluded, and we could explore space, together, both inner and outer, for ever, in peace." - Bill Hicks