August 26, 2012
Life seemed bleak and I was feeling sorry for myself - there didn't really seem to be much point in anything I was involved in and I could see no hope for the future.

Then scrolling past in the Twitter stream came the news that Neil Armstrong had died. 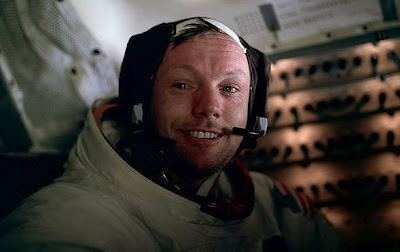 The sad news instantly took me back to childhood where my heroes were all scientists and explorers rather than sporty types or warriors. Neil Armstrong was the first and the only one with whom I felt a real time connection. Along with most of the rest of the species who were alive at the time and had access to television receiver, I clearly remember watching Armstrong step onto the surface of the Moon. It was the middle of the night but my parents had the foresight to wake me up and plonk me in front of the set. Despite my young age I knew exactly what was going on. Back then the Space Race was everywhere and I knew in my bones that it was only a matter of time before we were all living out there. It is a shame that collectively as a species we forgot this dream.

There are people who believe that the miracle never happened, but this is simply due to a failure of imagination. The concept of a fake is far easier to get your head round than the fantastic technological achievement of the Apollo programme and the terrifying scale of the journey. If you're ever in any doubt yourself, just remember what a terrific right hook Buzz Aldrin has.

It's true that the outward urge was born out of the dangerous rivalry of the Cold War, but having invented weapons too dreadful to use the superpowers were putting their competitive energies into something far more interesting. Without realising it, the human race had discovered a war-substitute. War itself grew from the natural instincts of human beings to protect their tribe against others. Like many instincts it was very difficult to curtail even once we realised that in fact we were all one tribe. But even if they can't be suppressed, instincts can be redirected...


"After ten thousand years, man had found something as exciting as war. Unfortunately, not all nations had yet realized that fact" - Arthur C Clarke, 2001: A Space Odyssey

I don't know what happened in the interim and why the great plan was forgotten. Abandoning warfare would have left enough energy and resources for both space exploration and feeding the world, bringing everyone up to the same level of opportunity. I suspect that the problem lay in the fact that those in positions of power - and by that I mean the anonymous super rich rather than those who are elected - had a vested interest in maintaining the status quo. Their primitive instincts were strong and having grown up in a world where they could have whatever they wanted, they weren't going to let that go without a fight. A fight between other people, of course. A sustained programme of space exploration might have led to a more enlightened perspective. This was the last thing they wanted.

In the long run I hope this will change again, that it is always darkest before the dawn. In the meantime I console myself with the knowledge that I was alive to see Neil Armstrong's first footprint, one of the most important events in the history of life on Earth. I am not exaggerating. The time span between the moment when the first nucleic acids clung together in those pools of goo billions of years ago and 20 July 1969 CE was the first era of terrestrial life, the time when it was confined to one planet. We are now living in the second era, even though we have yet to build upon this achievement.

I am certain that the name of Neil Armstrong will be remembered by Homo sapiens and their descendants long after the memory of the USA and USSR have passed into obscurity. So may Neil Armstrong rest in peace even though he is the first human being who will never really die, the first immortal.

Despite the sadness of the news itself life no longer felt bleak and I no longer felt sorry for myself. I was filled with hope and the sense that anything was possible.