What I Did On My Vacation

Far back in the mists of time when I first started this blog its main purpose was to make sure I didn't forget things.

That was six years ago. But then it evolved and I started waffling on about any number of old things, often to do with philosophy or science. Then I started becoming busy with other forms of writing and blog frequency was one of the victims of my lack of time. 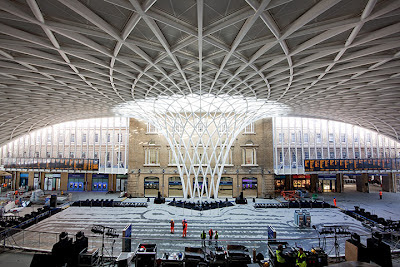 In an attempt to remedy this I am now going to temporarily return the blog to its original purpose. I'm off to Edinburgh again to, amongst other things, see some shows on the Fringe and it would be nice to have a record of what I end up managing to see. I hope it's more than I used to - previously I seemed to simply end up sitting in bars drinking with the idea of going to see a show hanging over me like an unpleasant obligation. Ridiculous. After all, I can sit in a bar and drink any time.

Of course I have to get there first. The trip did start suspiciously well when a Brighton bus driver let me off the fare simply because I was carrying a lot of luggage. Almost unheard of! A true hero.

I boarded the Brighton to London train and sat in an empty carriage. However, this is where it all started going wrong. I was singled out by the train's resident practitioner of  Extreme Eccentricity who told me his name was Crunchy and then spent the entire journey telling me all about the swimming pool in Portsmouth with a wave machine, asking me pointless circular questions and clapping his hands under the table when the answers pleased him.

Thinking back on it though at least he had good journey. If I had been able to cheer him up then the boredom and slight sense of unease I felt during the conversation was probably worth it in the grand scheme of things. And it was in some small way a relief to be conducting a conversation with someone who didn't have a hidden agenda. With Crunchy, what I saw was what I got.

Having parted company with Crunchy, catching the tube across London went surprisingly well considering I wasn't making the slightest attempt to Get Ahead Of The Games. Furthermore the Boris announcements had already been discontinued so my ears remained unmolested as well. The weird thing was that I found it oddly disappointing. I wanted to hear and get annoyed by them. I felt deprived of something to complain about.

My arrival at King's Cross saw to that. The new design was still unfamiliar enough to stoke the flames of my irritation, especially the way they seemed to have turned the tube station into a sprawling warren of confusingly unlabelled tunnels. Even once I'd found my way out the ordeal was far from over. The new layout of the main line station itself particularly displeased me.  It's a train station. It doesn't need an Arrivals Hall. I preferred it when there was a WHSmith where they forced you to buy chocolate and and you had to queue up along those annoying lines on the floor.

The Edinburgh train left on time, and it is from there that I'm writing this.

Thinking about it, I can see why I started steering my blog in the direction of philosophical and scientific musings. This blow by blow account of my movement over several hundred miles and minutes is not the most thrilling piece of prose ever to pour forth from my brain. Still perhaps things will pick up once I reach Edinburgh itself.

A child has just asked his mother how he got into her tummy in the first place.

Very good question. If he keeps thinking about big questions like that perhaps in years to come he'll be able to write some cracking blog entries.