Sometimes it is hard to think positive - as we are all frequently told to do - when you feel so awful. I am not talking about physically awful and am aware that by complaining about this whilst there are people in real physical pain and discomfort there is always the danger of coming across as a moaner.

But having a broken brain isn't really any fun either.

Sometimes it can make you feel like life is merely a case of keeping going out of sheer bloody-mindedness in the hope that perhaps a wonderful happy time is just around the corner. The problem comes when you realise that it has been just around the corner for twenty years or more. Is this is a disease or disability or is it just the way things are? 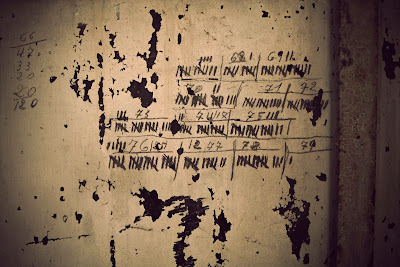 Someone with a bad leg spends their day limping as a matter of course and will be happy to take painkillers, use a stick or crutch and attend any number of physiotherapy clases in an attempt to make it better. Hell, they may even have an operation. And none of these attempts to make things better are frowned upon.

But when the faulty organ is the brain it means that things going wrong can affect the very self. The very identity and the centre of being. Other brains don't like to hear about that that. They don't take it seriously and any attempts to correct the issue are dismissed as nonsense.

"Pull yourself together!" the other brains say, "Stop feeling sorry for yourself and think positive!"

They fear the knowledge that the brain, the seat of their self, is just a spongy grey mass of synapses and tissue. They fear the fact that it's an organ and that it can potentially go wrong just like any other. They dismiss any evidence of it going wrong in others. They scoff at SSRIs, look down their nose at therapy and dismiss those taking time off sick with stress as skivers.

Well that's fair enough. We all do that. But living with the depressure in the head is worse. Death is a switching off, an absence whereas depression is a demijohn full of badness and anxiety. The worst thing about it is how unceasingly relentless it is. The bad feeling, the constant nervousness in the company of others. The lurking fear of becoming embarrassed about potential embarrassment that sparks off an emotional feedback loop and can end up driving you to hide in the toilet for ten minutes until everyone has forgotten you were there anyway.

Sometimes it's just too much to cope with but the weird thing is the unbearable moments do pass and allow you to sink back into the routine, somehow muddling through in one way or another until the next peak looms.

The way to avoid these peaks is to dose up on medication, remain in isolation and not have to deal with anyone. However, in today's society that's not practical or desirable. Whilst the pills can remove the worst of it they're like painkillers and whilst paracetamol and codeine would do a lot to remove the discomfort and pain of a broken ankle, in the long run it would be best to go and get it seen to in a fracture clinic.

Where is the fracture clinic of the mind? Perhaps all we need is to be taken to bits and then put back together again. It's probably all been caused by one of the pieces having been put in the wrong way during assembly. Of course if this magical clinic existed then there would always be the fear that you wouldn't be the same person afterwards but whilst that may very well be true it's not necessarily a bad thing. The important thing is continuity. As long as you can draw an unbroken thread of consciousness back to your earliest memories it doesn't matter if some parts are changed, replaced or removed.

Enough of the lurking anxiety. Refuse to accept this is simply who you are. Want to be better.

That's not too much to ask is it?
brain consciousness depression embarrassment emotion fear journal

Rhian said…
A straightforwardly sincere reply to anyone with a painful brain -
a) sometimes meds can be enough, like taking painkillers for a twisted ankle that needs time to heal, or a winter cold. For ailments that pass given time, &
b) my Fracture Clinic was The Mindful Way through Depression by Mark Williams (check Amazon). Helped me see the uneven ground I was about to twist my ankle on before I actually fell over ;)
Anecdotally, CBT has helped a lot of my anxious friends.
This post was brought to you by our Sponsors St Johns Wort & Meditation. Sorry for the lack of Star Wars Jokes.
Wednesday, September 26, 2012 7:58:00 am