What's in a Name?

January 12, 2013
There's something a bit creepy about logging onto Facebook these days.

I can't help imagining these messages from the system in the voice of Douglas Rain, otherwise known as Hal 9000 in 2001: A Space Odyssey.

How are you feeling, Chris? 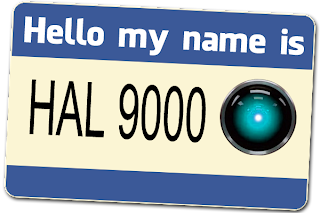 However, it's not the Halness of these pronouncements that's creepy. It's that they share something with Hal's mode of speech which is a major contributory factor to what made him frightening in the first place.

Just what do you think you're doing, Chris?

Inappropriate use of a person's name.

Of course there's nothing wrong with calling people by their name when saying hello or trying to attract their attention. However, once engaged in a conversation - either electronic or physical - I find it increasingly uncomfortable if the other person keeps using my name. It's almost like being inappropriately touched.

Yes, I know you're talking to me. There's no need to use my name again. It's creepy. It feels as if you're trying to ingratiate yourself with me or patronise me, neither of which I want. Even worse is when - in writing only as punctuation is notoriously difficult to pronounce - someone uses my name followed by a full stop and then tells me what they wanted to get across.

Chris. I think the important thing to consider here...

This makes me want to kill. It comes across as an attempt to be superior and didactic, neither of which I am remotely happy with.

I realise of course that a lot of this is a problem in my own head. In reality anyone using my name is just being friendly. However, it isn't helped by the fact that these are exactly the kind of tricks that some people - estate agents, police officers - may employ in an attempt to gain your confidence for their own ends; probably something they go on a course to learn. This behaviour only strengthens the name taboo in my head, forcing it to interpret the more innocent uses as patronising or deceiving. Overusing my name makes me suspicious that even though someone might be trying to appear friendly they have a hidden agenda and are trying to manipulate me.

There may well be more to it than that, as I have other quirks when it comes to the use of names.

Sometimes I feel I would rather die than refer to myself in the third person, than use my own name. And yet some people seem to do it all the time, telling themselves off, having quirky conversations with themselves for your benefit. I have no problem with this but cannot imagine ever being comfortable doing this myself.

This is strange because when writing fiction, Third Person Limited is my favourite point of view.

My final name quirk is a problem using other people's names. I will tie myself in ever more complex semantic knots trying to avoid doing this. At the beginning of an email or when saying hello to them is fine; when trying to attract their attention is uncomfortable but I can do it if I have to. It's certainly better than hey, you.

Anything else is forbidden. It just feels so bad.
journal name names psychology