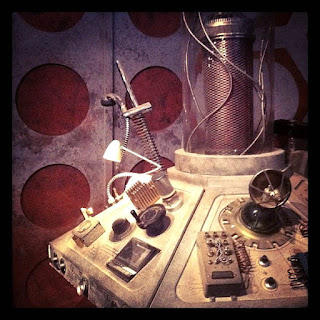 There is simultaneously something sad and laughable about the sight of redundant technology being thrown away. These old plastic and metal boxes, most of them that off-white grey that was so popular for a while, tumbled together in a skip or a dustbin. How clunky and huge they seem, how ridiculously inefficient and pathetically low in capacity. That shoebox-like cabinet that used to sit on someone's desk with a total storage of 100MB, an amount of data that would now fit into something the size of a toenail clipping ten times over. How far we have come in such a relatively short space of time.

And yet in a way this old tech is also oddly exciting. When we look at it we remember how not that long ago such a thing was an object of desire. That it epitomised bold new developments in technology that seemed so groundbreaking and enviable.

That hand-held scanner that I was so desperate for in the early nineties that looked like a bizarre hybrid of a torch and a miniature vacuum cleaner and which required me to dismantle my PC in order to insert the expansion card.

The external ZIP drive that I wondered about ordering with my latest PC at around the turn of the millenium all the better to back up my data with (the piles of floppies really were getting a bit much and I craved downsizing).

These covetous memories serve to add a tinge of exhilaration and melancholy to the sight. These objects may be laughable now but once upon a time you would have sold your soul for them.

The familiarity and ubiquitousness of technology these days make us take it for granted and not make the most of it. As a teenager the idea of using a video camera was a thrilling prospect. My dad had bought one - a great hulking thing that was connected to a box you had to sling over your shoulder - but wouldn't let us just use it willy-nilly. We had to write a script first.

Well fair enough, I thought. So I spent some time writing a script. Of course it involved spacecraft and aliens; I even gave a lot of though as to how I was going to put the special effects together. But for some reason it never got made, and in the end my brother, my sister and I just waited for our parents to go out before filming our own short films and episodes of Doctor Who.

Nowadays many of us have the equivalent of BBC Television Centre in our pockets and it is quite possible for us to film, edit and transmit our own programmes without getting out of bed. But because it's now so easy it's no longer quite as special. These days I can do at any time those things that I wanted to do so badly when I was a child, but most of the time I can't be bothered. That free arcade game they had in the dentist's waiting room was whole orders of magnitude less sophisticated than Angry Birds and yet about a million times more exciting and eagerly anticipated.

There is probably a lesson to be learned here about taking things for granted. When you gain control of your own life those things you promised yourself you'd do every day no longer seem as urgent because you can do them any time and so you end up not doing them at all.

When I was a kid for a while my favourite toy was something I'd made myself. It consisted of a green box file containing a number of sheets of A4 paper upon which I'd drawn various electronic devices. You clipped the paper to the open lid when you wanted to use that particular device. Sometimes you combined the devices - clipping the TV screen to the lid and having the typewriter upper most in the box meant that you had a computer. Also available were a radio, a reel to reel tape recorder and a record player. There were a few more devices, but I can't remember what they were now.

In retrospect it's now obvious that this was a toy laptop. My mind was groping its way towards what the most exciting object of desire could possibly be.

It's a shame my current laptop can no longer engender such feelings of enthusiasm.