"That is just the way with Memory; nothing that she brings to us is complete. She is a wilful child; all her toys are broken. I remember tumbling into a huge dust-hole when a very small boy, but I have not the faintest recollection of ever getting out again; and if memory were all we had to trust to, I should be compelled to believe I was there still." 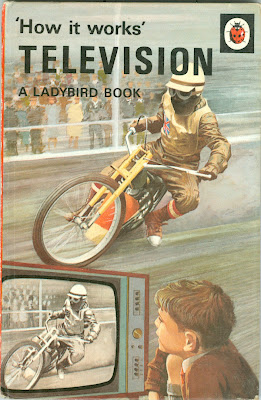 We are one of the first generations who can precisely replay many elements of our childhood memories on demand. This has never happened before in the history of human beings.

Strange as it may seem, in the distant past they didn't even have TV. It was a civilisation changing invention, sitting between the Printing Press and the Internet in the communication triumvirate that holds sway over our hearts and minds. Never mind those senile old fossils the Wheel and Fire, it's talking to each other and telling stories that has made us what we are today.

And yet TV is still less than a century old. There are people around who remember before it existed.

At first it was just another aspect of your life, a lazier way of taking in a story and a way to keep yourself entertained. Nevertheless it was precious; if you missed something that was it. Tough shit. True there were repeats, but rarely of things you wanted to see. On the odd occasion when something you did like was on again it felt like magic. You could enjoy it all over again with the added frisson of somehow knowing what was coming next.

Years went by and eventually you were able to buy programmes you remembered from your youth. And sometimes, despite the fact that you'd only seen them once, there were bits that you remembered very clearly, you knew the lines that were coming next and who was about to walk through that door. And, perhaps more than a mere madeleine dipped in tea, watching this thing again brought back the feeling of the time, memories you'd long thought lost - or lost so thoroughly that you hadn't realised they had ever been there in the first place - bobbing back to the surface of consciousness and shining unexpectedly in the light of the present. For a brief moment you could be transported back to that time.

Not always a good thing of course. The past contains its fair share of unpleasantness. This bully. That teacher. Those nightmares.

And yet there's a strange phenomenon that can be observed when finally seeing something again, when a chunk of childhood - long inaccessible - is unearthed from the bottom of the video trunk. Sometimes what you see on the screen doesn't correspond to what you remember. The memory you have been living with all these years is a lie - and there on the screen is incontrovertible proof.

There are a couple of these incidents that spring to mind for me. The first was when I saw the famous Goodies episode Kitten Kong again. From watching it on first broadcast I clearly remembered Bill Oddie walking into the Goodies HQ and saying of Twinkle the giant kitten "Well, it's eaten up the Post Office Tower!"

And yet in the repeat it was different. They were already in the HQ discussing the situation.

"It's only a kitten!" said Graham.

OK so an unimportant difference, but the important thing was I had remembered something that hadn't happened.

The second was far more recently when I finally saw on DVD (for the first time since it was broadcast) the Doctor Who story Mind of Evil. There was a whole scene that I remembered completely differently from what was actually in the episode.  Such is the strength of this memory that I can still clearly see this personal director's cut in my head, even though it was never committed to film.

And if memories of TV shows are unreliable what about the memories of real life? No matter how big the stack of bibles they swear on, can you ever really believe someone's testimony?