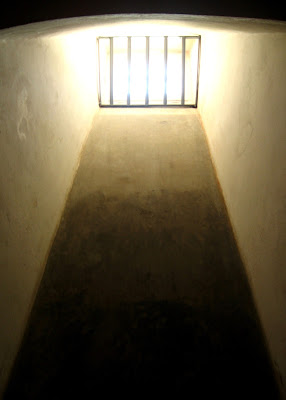 Walking down the street this afternoon I found myself in a part of town that I hadn't really visited that much of late, although it was an area I used to frequent more when I first moved down here some fifteen or so years ago.  Fifteen years!  Quite absurd of course to consider that such time had passed. It only seemed like the other day that I made my way down to the coast from London and...

Actually no. I realised that it did seem like a long time ago. The biggest difference was how I felt. Walking down that street again evoked in me a Proustian rush, I recalled just how free and excited I felt back then. I'd made a big change to my life and uprooted myself. The possibilities appeared endless, above me an infinite blue sky that reflected my state of mind.

I instantly became depressed. Things were so much more negative and gloomy now, the world a far more depressing place. What was it that had changed so much so as to skew my outlook to such a large degree?

Aside from the passage of time I could think of very little. OK, so I was now older but all that really meant was a few more pounds, a few more wrinkles and a few less hairs on my head. Surely that wasn't enough to have knocked my mood so badly off course over the period of a decade and a half? Other than that I was still in employment, single (which can be seen as both a positive and negative thing) and if anything better off and more financially stable than I had been in 1998. Furthermore in the intervening years I'd actually achieved a few things which the younger me would probably have been quite pleased with.

Why did I feel so trapped? There was no logical reason for me not to feel just as optimistic as I had back then and yet in comparison to times past I felt as if I was looking at the bright warm world through thick iron bars, locked up in a prison in my head, barely able to turn around in my cell. No hope, no future, no change in sight. The memory of how I used to feel was just another torture, taunting me with a glimpse of how I could never feel again.

It was obvious that I was my own jailer. I'd locked myself in there, the bars were of my own making. The opportunities and hope I felt all around me back in 1998 were all still there, and there was no reason I could not still grab hold of them with both hands in the way I perhaps should have back then. I just had to break out of the prison.

I am still not convinced that I have, but the sense that the bars were illusory is stronger now than it has been for a very long time. The only thing holding me back is myself which raises the question of why I have been doing it.

It could be fear of failure or fear of the unknown or perhaps a lack of imagination? Or maybe my surroundings having grown so familiar that I simply forgot how much potential lay within them.

There is nothing I cannot try. Who says I have to go home and go to bed after work every single day? There are a million things I could be doing and I have no excuse not to do as many of them as I can.

I am cutting through the bars with an oxyacetylene torch.

Once I have done so the trick will be to keep reminding myself that they don't exist.
aging behaviour depression journal mind