Beware of the Cliffhanger!

August 16, 2013
Recently Channel Four screened an interesting drama - a bizarre eight part story from France called The Returned (Les Revenants). Like many TV viewers in the UK over the past few years I've found the subtitled European drama on offer quite gripping and what with the supernatural elements of the show that were obvious from the trailers, I made sure I watched the whole series. 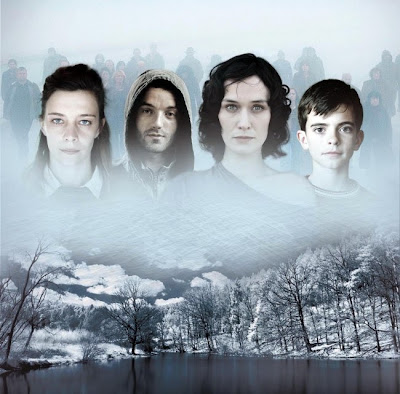 It was as good as I hoped. For me the fact that it was made in a different country and therefore in a different language probably added to its otherworldliness, but nevertheless it certainly didn't need any help in that direction, being both alarming and disturbing in equal measure.  I had never seen anything quite like it before although - like many contemporary shows - it could be said to have some of the DNA of Twin Peaks in its genetic makeup. The show thrived on mystery, often the viewers being left to work things out for themselves. Personally I have always found drama that does this far more interesting. The concentration pays off and you get more out of it from having mentally contributed to the arrival of the narrative in your head. Far better than having obvious plot points and foreshadowing hammered home with the spoons they're using to feed it to you.

The end of the eighth and final episode of the first series was chilling and dramatic and furthermore left a lot hanging in the fine tradition of end of season cliffhangers back through "Not Penny's Boat" all the way to the grandparent of them all, "I am Locutus of Borg".  Whilst it is never a good idea to wish your life away I must say I'm impatient to see what happens in season two of The Returned in 2014.

However I was astonished by the violent reaction to this in some quarters - both online and in print. A number of viewers and critics alike seemed outraged that things had been left hanging. One even said they were so disappointed that, no matter how much they loved the show, they wouldn't be watching season two.

It's an end of season cliffhanger. It's what sometimes happens in TV shows, particularly genre ones. Why has this one in particular caused such a fuss?

I have no idea, but suspect that it might be because the audience was atypical for a genre show.  The vogue for subtitled European TV drama was kicked off by a number of Scandinavian crime or political shows and perhaps The Returned inherited an audience more used to Wallender, Borgen, The Killing or The Bridge, all of which had closure at the end of seasons (even if most of the time it was a very downbeat or even bleak closure).

Despite its increased popularity these days there may well be some snobbery about genre TV still floating about. The Returned was probably lucky to get a sizeable audience on the basis of its origin and language rather than its narrative category. And let's hope that, having enjoyed it, some of the audience who wouldn't normally touch them with a bargepole might be persuaded to watch more shows dealing with weird shit.

If they do then one thing they may have to get used to is the end of season cliffhanger. Whilst not used religiously in genre shows, a lot of the time one is expecting something as the final minutes of the final episode approach - even if it turns out to be more tongue in cheek such as the events heralded by David Tennant's "What? What?! WHAT?!" at the end of RTD era Doctor Who seasons.

Then again Breaking Bad has end of season cliffhangers. No-one ever threatened to boycott the next season of that...
cliffhanger drama genre people SF the returned tv