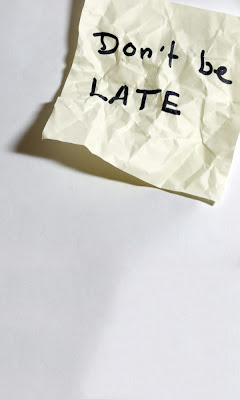 A long time ago in the days before mobile phones we took appointments far more seriously than we do now. In some ways this was a good thing but in others it meant that you could end up having to wait for someone for a very long time - sometimes hours.

I had occasion to be both ends of such embarrassing situations. Both were, I guess, dates. I can't think which of the two situations - being late or being stood up - was the worst to be in.

The time that I was late came first. Admittedly I did have an excuse - I'd been at a gig in Bath the evening before and had spent most of the night hanging around the station, variously walking about and attempting to find somewhere for a quick doze. Eventually the first train of the day heading for London arrived. I can't remember what time it was but probably something like six thirty or so. You'd have thought that it would mean that I had plenty of time to get back, but the train seemed to be stopping at every single little platform between the West Country and West London with the result that I wasn't in London until mid morning. This would have been fine if it hadn't been for the fact that I had arranged to meet a new potential girlfriend at Embankment station to spend the day wandering around London.

I eventually rolled up at least an hour late if not more and was simultaneously relieved and worried to see her still waiting there albeit with a face like thunder. Thankfully after a shaky start the date went quite well and in retrospect it was a shame that we didn't go out for longer.

Fast forward about ten years and after a night at the Slimelight I'd arranged to meet a new potential girlfriend outside Oxford Circus tube at around 2pm to go for a drink somewhere in the West End. Perhaps an over ambitious plan seeing as we'd both been up clubbing until 7.30am but back then I still had my enthusiasm and after a couple of hours with my head down I was ready to get up and go out again. Sadly, it turned out that she wasn't and I sat on a bench at the top of Argyll Street for almost two hours before she emerged from the tube station looking guilty. I forgave her instantly and the date went quite well. Once again in retrospect it's a shame that we didn't go out for longer.

Would both dates have been massively improved if mobile phones had existed in those days? I don't know. It might have diffused any subconscious tension that may have been hanging around in the air as a result of one half of the assignation being tardy. But on the other hand the existence of the mobile phone and the ease of communication it provides - especially texting - means that people no longer feel compelled to keep their appointments. Would the dates I talked about above even have happened if we'd had mobile phones? We might have cancelled and then never rescheduled.

However, I don't think the failure of these relationships can be blamed on the non-existence of mobile phones at the time. The reason these relationships didn't happen is entirely my fault. They were both intelligent and attractive women, the kind of women that I liked. But in each of the two situations I didn't show them enough interest because I had my mind on someone else at the time, someone else with whom I had become unhealthily obsessed but with whom I didn't stand a chance. And the one-track nature of my monogamous mind led me to pursue the unobtainable at the expense of what was right in front of me.

There is probably a lesson to be learned here. I wonder if I've learned it yet?
appointments cellphone journal mobile phone people responsibility telephone text