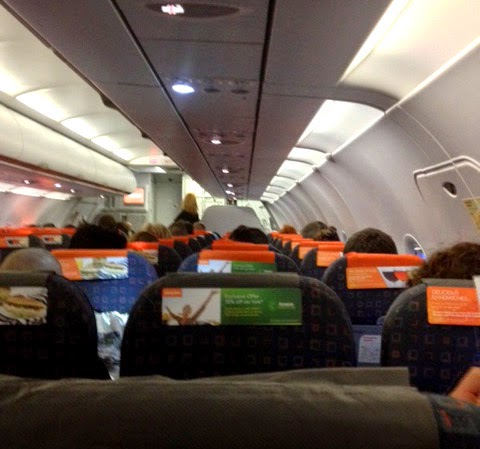 This certainly isn’t the first time I’ve written a blog whilst miles up in the air, but it has been a while. In fact it’s been a while since I flew anywhere at all – and even then it was the same place I’m heading for now.

Why the gap? I don’t know I just don’t seem to have had the time or inclination to go anywhere abroad. Plus my passport ran out a couple of years ago. But the thing is that’s just an excuse, I like travelling about and part of my MO these days is to ensure that I keep doing different things in an attempt to fool my brain into thinking time is lasting longer.

Or perhaps when I do different things time is lasting longer. It’s all subjective after all.

Anyway I thought it was about time I wrote another blog entry as I don’t yet have one for May 2014 and that month is nearly over. It’s a far cry from the days when I used to blog on an almost daily basis. In those days my blog was something I used to look forward to and I enjoyed uncovering fresh topics to attack from differing angles. But now? I keep it up for the sake of it and most of the time the subjects aren’t as complex and interesting as they used to be. Of course I am still writing my 750 words every day, but that is another matter and of course few of those entries are suitable for immediate public consumption.

So why am I less prolific?

The main issue that prevented me from both travelling and blogging seems to have been becoming inordinately busy. I feel far busier now than I ever have in my life, and as I sit here on a plane on a Thursday evening it is not an exaggeration to say that this week seems to have been one of the busiest weeks I’ve had in a long time, work of both the day job and freelance variety seeming to have reached a crescendo simultaneously.

But am I just imagining it all? Is this “blimey things are getting hectic” feeling just a side effect of old age or are there really far more demands on us than there used to be?

I don’t know although one thing I do know is that I am less willing these days to kick back and relax in the evenings and at weekends. Twenty years ago once I caught the tube home I was ready for play, it was party time and I thought nothing of staying up late on a work night and even going off to a gig in Manchester and catching the train back overnight and rolling straight into work from Euston the next morning. Anything else could wait, After all, I had all the time in the world, time which sometimes seemed to last for ever.

And then something happened. The millennium turned and suddenly there wasn’t enough time and ten years could pass without  anything really happening. It’s already 2014 and yet it still feels as if the turn of the century was only a couple of years ago instead of the same amount of time that separates it from 1986 in the other direction.

And this is why I am so busy -  I am trying to cram as much as possible into whatever time I have left. There are books to be read and written, music to be listened to and played, challenges to be met and yes, still good times to be had. Whereas in the past the day job was a means to an end now it gets in the way as time becomes more valuable than money (although of course it is still necessary as I doubt the landlord would like to be paid in stories, blog entries, websites, graphic design or basslines).

And I know how important play is – without it Jack is a dull boy so we are told – but the kind of work I want to do is far more fulfilling.

One of the hardest facts to accept is that you or I are nothing particularly special and that there are in fact millions of people just like us all over the world. Nevertheless this is true - but at the same time we are each of us unique and what we create is perhaps the only way of proving that.

If the price I pay is feeling that it’s all got a bit busy lately then so be it.
age berlin journal play time work