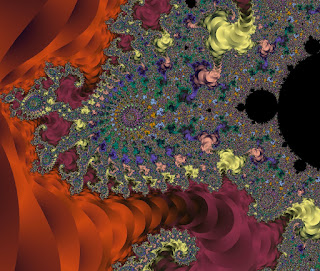 There is no-one to blame. The whole feeling of being put upon by fate, the weather or other so-called acts of God comes not from reality but from the human brain's almost infinite capacity for Pattern Recognition.

Pattern recognition is how life makes sense of the universe. In the case of human beings the process has become so baroque and complex that it's unsurprising when it starts to throw out anomalies.

We may think we see what is in front of us but that is very far from the truth.

Without the high intensity interpretation and pattern matching going on in the visual cortex of the brain, the field of view is a chaotic mess of shape and shade. Even something as simple as identifying colour is tied up with image identification and processing. As the recent furore about a certain dress and - more interestingly - the very different colour palette perceived by the Himba tribe of Namibia prove, it seems that the ability to distinguish between shades of colour is linked to what we think they are and the words we have for them.

Thus the identification and interpretation of reality has control over reality itself. Before we see what is in front of us, we need to know what to expect to see in front of us. Something we weren't expecting - and have no experience of - might even be ignored, effectively invisible. Furthermore we might see things that aren't there simply because that's what we were expecting.

This skewing of reality isn't unique to vision. The human brain is just as adept at recognising and scouring for patterns in sound and behaviour (with all the consequences of errors as described above).

One feature thrown up by this process is a failure to notice that something has changed. The older we get the more patterns there are in our memory to search when we come across something new - and after a while we stop bothering. Instead of comparing and contrasting the data coming in through our senses with what we think is the case we just take it as read that everything is as it was the last time we looked. This is why it's possible to lose something, look everywhere for it, and then discover it was in front of our nose all this time. Children's brains are less full and far more elastic - they're constantly on the look out for something new to add to their brain's pattern database. Show a child a room in which something minor has changed and they will spot it straight away. An adult on the other hand can miss it for days if they ever notice it at all.

Getting older also increases the incidence of pattern recognition errors. If something is hauntingly familiar but we just can't place it then it's more likely that our brain is misidentifying something rather than struggling to find something that's there somewhere. After all what's the point of "half a memory"? Either we've found the data or you haven't.

But by far the biggest anomaly thrown out by the brain's pattern recognition routines is the feeling that there's some kind of plan, that things happen for a reason. The brain is constantly looking for patterns and sees them in chaos, imposing order on the random universe around us.

Sometimes the universe throws us some mad synchronicity or coincidence. Something that - purely by chance - fits together with something in the pattern database. This kicks the the pattern recognition into high gear, setting off all sorts of alarms. This has happened! This has happened! And we begin looking around for the underlying meaning. There must be one of course! Even though there isn't.

One of the reasons we see specific patterns is because we're on the lookout for them. We discard and ignore the myriad non-coincidental things that come our way constantly, picking out the ones we feel are significant thereby giving them significance in a self-fulfilling prophecy.

This doesn't make the coincidences less valuable.  We are constructing something we want to see (or in the case of those with extreme self-loathing something they don't want to see) so despite the randomness of the source material we draw meaningful information about our hopes and fears from the chaos. This is how tarot cards work.

Human beings use the accidental nature of reality as a substrate to provide random input to their brains in order to what's most on their minds. We might as well stare at a television screen full of static as a spread of tarot cards - the information extracted will be the same.