July 02, 2015
Not that long ago by the timescale of the universe there was no-one on Earth to observe anything. 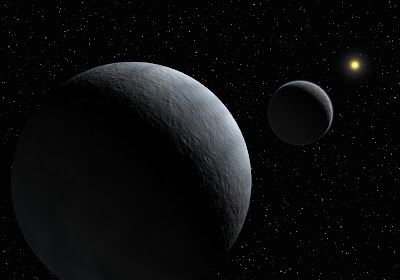 The solar system had been in existence for billions of years and the various bodies within it had long settled into their orbits with clockwork precision. Close in to the parent star smaller rocky bodies circled in the light, ring fenced by a zone in which gravitational perturbation had prevented any single body coalescing from the thousands that still swarmed within. Beyond that larger bodies formed chiefly of gas orbited in stately majesty, themselves circled by vast extended families of smaller bodies.

And out on the fringes of the system lay further belts of small rocky and icy worlds some of which circled the star in a wildly eccentric manner. Occasionally one of these most distant of the star's children would fall inwards, jets of gas and vapour blown from their surfaces by the solar wind in tails millions of miles long.

None of the bodies in the solar system or beyond had names or types. They just were.  Even time was abstract, there being nothing to measure it, to compare this time with that time. Orbits and other movements were simply equations made solid, scrawled across the blackboard of eternity.

And then something began to happen on the third world, the largest body in the inner system. Complex chemical reactions took place which led to self replicating molecules which spread and evolved - a process that given big enough numbers and long enough spans of time was inevitable due to the laws of mathematics. As the numbers increased and the spans of time available inflated, these complex molecules gave rise to a specialised subset of chemistry (in itself a subset of physics which ultimately was just another part of mathematics) called biology.

At this point of course - just like the celestial bodies turning over and over in the blackness above - these disciplines had no names either and were all just part of the single Way That Things Were.

Quite recently the biological structures developed an awareness of themselves and of the universe around them.  Quite how this arose is unclear - possibly to do with the complexity of the systems and the feedback loops they had developed in order to have survived this long. It could also have been that they started to exist in time, counting off the periods when the star appeared to travel overhead and comparing what had happened with what might happen. Perhaps this process meant that self awareness was bound to follow.

They defined themselves as people and began looking around at the universe that had spawned them and tried to make sense of it in terms they could understand.

The people started to change the environment around them using tools. Once this had become part and parcel of who they were they wondered if that was how the universe around them had come to be, that someone else - a bigger and earlier variety of people - had used tools to create what they saw around them. They looked the lights in the sky and gave them names - perhaps these lights were the older and bigger beings that had shaped the world they saw around them?

However as belief systems became more complex and the ways of looking at the universe more accurate it became obvious that the lights in the sky were in fact other worlds and other stars. And due to the way the minds of people worked - the conditions that had shaped their minds in the first place - they began classifying what they saw up in the heavens, assigning categories to things that neither needed nor understood them.

These were the categories that gave the people the impression that they understood the universe when all they had done was create a one dimensional sketch of it using language and understood that instead.

The people discovered yet more worlds and begun reaching out to them with marvellously
complex tools getting closer and closer views of the extraordinary diversity of the universe. Unfortunately the more information there was the more elaborate and baroque the taxonomies invented to control it had to be.

Eventually people had to start hacking and patching the rules they'd invented in the first place simply to make them fit the observable facts. That body they'd named Pluto? Apparently it no longer fitted into the artificial category "planet" so another artificial category had to be invented to accommodate it and a handful of other bodies. It was now a "dwarf planet".

And even though these categories were purely arbitrary some people became furious about this change in nomenclature and began campaigning for the restoration of Pluto's imagined status.

Pluto existed for billions of years before humanity without a name or category - and will no doubt exist for billions more after we have gone. Getting het up about what we call it is futile and misses the entire point. Our name for Pluto is part of us, not part of it.

We will be able to see the reality of Pluto close up for the very first time on 14 July.

Now that is something worth getting excited about.