November 05, 2021
Some of this may cover similar ground to parts of blog entries I've written here in the past but none of them quite combine the topics in this order so I thought it was worth tweaking this short piece (originally written as an update for Unbound) and making it available here.

Oddly, considering the subject of my debut novel Comeback, I never thought I would end up writing Fantasy novels, Urban or otherwise. When I was younger and first expressed ambition in the direction of writing professionally, I was convinced I'd write Science Fiction. This was partly because that was what I'd mainly been reading in adulthood up until that point. 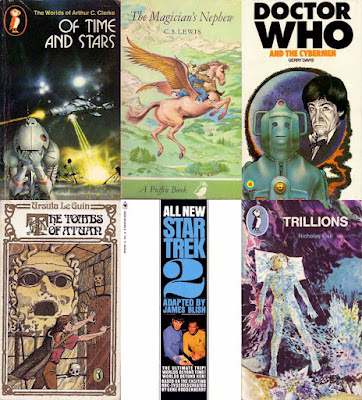 And yet the majority of the genre writing I enjoyed as a child was fantasy. I can't quite remember what the first novel I read was but do remember reading C S Lewis's Narnia and Ursula Le Guin's Earthsea books quite early on. Other favourites included Richard Carpenter's two Catweazle novels, Paul Gallico's Jennie and - to a lesser extent - J R R Tolkien’s oeuvre. All Fantasy of one stripe or another, a couple veering towards what might now be considered Urban Fantasy (Catweazle was after all an 11th Century wizard transported into the early 1970s and Jennie involved a boy being transformed into a cat in 1950s London).

As such some of my earliest attempts at writing were indeed Fantasy, from a Narnia fanfic entitled "Wonderful Advenchers" to stories about me and my best friend Shamus becoming wizards and making "poshuns".

So where did this Science Fiction thing come from?

I suspect it was a combination of two main things - the space programme and Doctor Who. My earliest obsession was astronomy, partly inspired by the series of picture cards given away with packets of Brooke Bond tea, which depicted the Race Into Space. I even remember watching Neil Armstrong stepping onto the moon at four in the morning and looking up at the moon - possibly on the next day - and thinking, "there are people there".

Doctor Who was also important - it was something that had always been there and that I'd always watched even if at that stage I was too young to really understand it. A month before Apollo 11 it took a break and I recall people talking about its replacement, something called Star Trek which I also took to immediately and which inspired many a playground game at school. I usually ended up cast in the role of Mr Spock while my friend Peter - who owned a set of Star Trek Viewmaster reels - always insisted on being Kirk (and also kept insisting on going down with the ship as many of the games involved the Enterprise being about to explode for some reason).

Thus were the roots of my SF obsession were laid down. The first SF books I read were some Doctor Who Target novelisations I'd won in a drawing competition, plus a couple of Star Trek novelisations by James Blish. In an attempt to wean me off these my parents bought me some Puffin books by Arthur C Clarke and Nicholas Fisk. From that point forward I was hooked and spent many a visit to the local library raiding their SF section, which conveniently was located next to the children's section. This probably says something about the genre's reputation at the time.

Some of what I read was astonishing and quite adult - probably inappropriate for me at that age. The pulp fiction fittings and fixtures allowed the authors to explore new facets of sex and other taboo subjects under the radar as it were.

I kept up with trends in SF as an adult, enjoying space opera and cyberpunk alike. The first novel I wrote (now thankfully consigned to the recesses of my hard disk) was an SF tale of near future space travel and first contact with aliens.

So where did this Urban Fantasy thing come from?

It was partly what I started reading. Being introduced to Terry Pratchett's novels ("It's like Douglas Adams but for Fantasy") rekindled my interest in the genre and then writers like China Mieville and Neil Gaiman came along, transplanting the magical and fantastic into the everyday. Jeff Noon, Michael Marshall Smith and Simon Ings were also influences, mashing up SF and Fantasy in a way that I found appealing.

But it wasn't until I attended the creative writing course that birthed Comeback that I realised that it was what I was going to write as well. The first term was all about archetypes and myths and originally Genie appeared in a short piece written as one of a series of exercises involving mythology. (Others involved Hera and Zeus appearing on the Jeremy Kyle Show, Echo and Narcissus in modern Los Angeles and an SF take on The Fisherman and the Jinni from One Thousand and One Nights.)

However Genie was the one who wouldn't leave me alone until I'd finished her story, a story which took me by surprise as I uncovered the path of her journey.

Hopefully it will take you by surprise as well – and you can read it yourself for as little as 99p, there are a variety of links on my website here or at the top left hand side of this blog entry.
comeback fantasy genre SF urban fantasy writing