If they ever thought about it, most people who know me might say that because I'm quiet or reserved, shy, don't make a lot of noise in groups or anything  — aloof or secretive as the people who don't like me might put it – that I would also not want to stand up in front of a load of people and talk or perform. 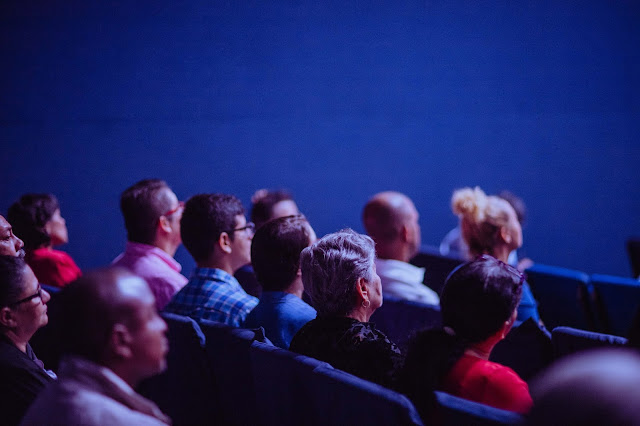 Oddly (they might think) the reverse is actually true.

For example when I was working as part of the user facing section of a department at a university every autumn the Welcome Talks would come round where we'd have to take turns to deliver a "welcome to our services" talk to a large lecture hall full of freshers. My colleagues — who were as a rule all more social and gregarious than me (I still remember that brief moment when I ended up standing there with no-one talking to me while all around people were chatting in groups at my own leaving do) — all dreaded it.

I was absolutely fine. No, more than that, I actively looked forward to it. I enjoyed it.

I did wonder about why this was (and this was in the days before my autism diagnosis). At the time I put it down to having a definitely defined role during that Welcome Talk. I was the Person Doing The Talk so there was no need for shyness or awkwardness. The same thing applied to delivering training sessions. I enjoyed it and was good at it.

On the other hand, social situations like leaving dos... I didn’t know the rules and roles that applied. Were there any? What was I supposed to be doing? There wasn't anything written down but everyone else seemed to already know all the answers.

In the light of my autism diagnosis this continues to make sense and in fact makes a lot more of it now. Aside from the above there are other factors at play. In particular it’s all about performance.

To get by in a world where most of the other people seem to automatically know the unspoken rules and regulations of social interaction that you don’t requires a huge amount of observation to try and find out what the correct rules are. Once an approximation of them has been worked out the only way I can hope to fit in is by performing them.

Of course it doesn’t always work — see the example above — but does mean one thing. I have become very practiced at performing. Where there is a very clear set of rules — a script that needs to be recited, some information that needs to be imparted or some music that needs to be played — that’s a piece of cake compared to the complex and opaque rules that apply to social interactions. I even enjoy it as for once I know what I am doing and also the people on the receiving end are getting what they expect from the interaction.

I am actually communicating with a group of people all at once. Go me!

Photo by Luis Quintero from Pexels