Firstly the disclaimer: yes, I know what dreams are likely to be in reality. No need for any "well actually" here as this is not a psychological treatise, it's a flight of fancy. A stream of consciousness. So please indulge me.

There's nothing quite as frustrating as having an involving and fascinating dream only for the details to evaporate rapidly on awakening. The emotions linger around the head affecting the mood like the perfume of someone fascinating who's just left the room before you got to properly talk to them at a party. Your only chance if if they return - you can't follow them because you might get lost. Besides, what if they're busy? They're bound to be talking to someone else. And you don't want to bother them.

Although to be honest I can't remember the last time I went to a party. 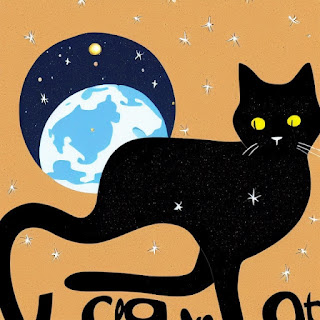 When this happens with dreams you simply have to comfort yourself with the effect they've had on your mental state. If you're lucky it's been a good dream which sets you up for the day. Perhaps you spent some time with someone interesting in there, someone with whom you just clicked. Of course there's always an element of melancholy on awakening when you realise that this soulmate doesn't even exist in the real world, but nevertheless they've had a positive influence on you which isn't bad for someone imaginary.

Unfortunately the good ones are more often than not the ones you forget. The bad dreams are memorable and stick in the mind. There are evolutionary reasons for remembering bad stuff and nightmares are no exception.

Where do dreams go when we're not having them? Most would say nowhere - they just disintegrate. However given that some recur on a regular basis they'd either have to reassemble themselves within the head in time for their next performance or actually be stored.

But where are they stored? More than once I've come across other people that have had the same recurring dreams as me. Does this mean that they've got their own copy of the dream or do they just download it from the cloud when they need it? If the latter, where exactly is the cloud?

Perhaps recurring dreams are like meteor showers and we're the planets. Every so often our orbit will carry us through the cloud of debris left behind by a psychological comet and if we're looking in the right direction we'll have the dream again.  Someone sharing your orbit will also pass through the cloud and have the same dream. Of course we will leave our mark on them as we pass through them which might explain how when you meet someone for the first time and yet both of you are convinced you've met before can happen. Perhaps it's because you've both had the same dream at some point, a recurring dream for both in which you've been picking up traces of each other. A feedback loop that links you in your sleep for a short while.

Some of these dream debris clouds must be absolutely enormous as so many people have them - I bet the "teeth falling out" dream cloud is half the size of the asteroid belt in relative terms.

Some people claim never to dream. But they probably do; it's just that they have very thick atmospheres (like Venus) so from the surface they have absolutely no idea that the display is going on up above them every night.

People as planets, we orbit each other and move about like balls on a pool table. Like elementary particles in a cloud chamber we leave trails of bubbles and pass through those left by others. If we're in a particularly perceptive frame of mind - say asleep and dreaming - perhaps we can leave messages for each other. Next time you're asleep find a stick of chalk and write "hello" (or something else) on the pavement. Perhaps I'll see it the next time I'm passing.