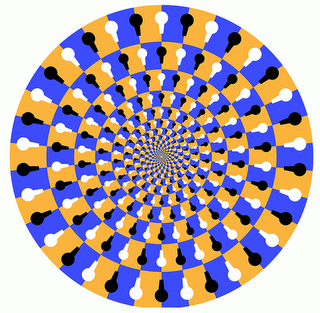 I'm going to go on about The Question Machine (QM) again today. I've been theorising about and blaming it for any number of things over the past couple of months. For anyone reading this for the first time, the QM is my way of describing the way the brain builds up a picture of the world around it, starting from first principles (is that a straight line? yes) and after twenty million questions in a short space of time arriving at a correct description of what's being presented to it.

Previously I've been interested in what happens when the QM's sense of discrimination is turned down or off (resulting in dreams or hallucinations) but here I'm going to poke it with a stick whilst it's still on full power.

There is a phenomenon I've noticed myself but which I've never seen specifically described (and why should it, it only occurs in specialised circumstances). I used to hitch-hike around the country a lot when I was younger, principally to go and see bands play outside London. I'm sure I could write a whole series of blog entries about that by itself, but on this occasion that's not why I'm here. Whilst hitching I noticed a visual illusion which I called Hitcher's Lag. Standing by the side of the road with your thumb out you get used to seeing objects rushing towards you, although unless you're very unlucky none actually hit you. But unless you're very lucky, you're going to be there for a while.

I noticed that if, after a prolonged bout of roadside hoping I turned around and stared at a stationary object it appeared to be receding from me. It was as if the part of the QM that detected things moving towards me had got tired and was taking things as read, whereas the part detecting things moving away from me was getting bored and was eager to go to work - so the moment it saw something not moving towards me it interpreted it as moving away.

So it seems that the QM isn't as reliable as it might be and can be fooled into giving the wrong answers even when it's fully switched on.

By the time you've read this far, the mandala at the top of the page (Kitaoka & Ashida's peripheral drift rotating snake illusion) has probably been bugging you for a while. It's fine when you're looking straight at it, but the moment you look at the text of the blog entry you become aware that it's started moving. You look back, hoping to catch it at it, but the moment you pay attention, it's motionless again.

You begin to realise that your internal picture of the universe around you isn't as complete as you might like to think. The QM is very good of telling you exactly what's in front of your nose, but it takes a lot of the rest as read and reassures you that you know what's off to the side when in fact human peripheral vision is very bad. Try holding a playing card out at arm's length to your right whilst looking forward. Move your arm forwards so as to slowly bring the card into your field of view - you'll be surprised how long it is before you can tell it's the Ace of Spades.

So even though we think we're fully aware of our environment, a lot of this awareness is presumed knowledge and false confidence based on very shaky (or even absent) data. It doesn't feel like it's imperfect or missing as we're programmed to trust this knowledge.

Of course it's not always trustworthy. In the illusion above the QMs poor resolution at the peripheries misinterprets the repeating levels of light, shade and tone as movement, even though we can't say exactly what it is that's moving. If we concentrate on them with the corner of the eye (tricky I'll grant you) there's no sense of any of the actual elements of the circles themselves moving, just that somewhere "over there" movement is involved. Because of such acts of flawed analysis, we can say that the world each of us lives in is no more than a series of best guesses given the data available - and it's very easy for that data to be wrong.

Nothing is necessarily as it seems.
brain eye hitch-hike journal optical illusion