The Detail in the Devil 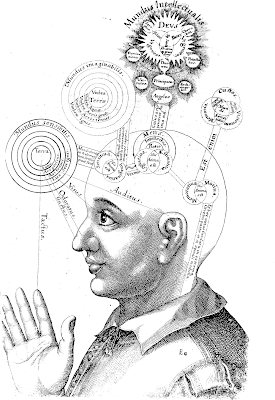 In case you were wondering, I am still wading through psychology and philosophy textbooks in an effort to find out what makes us tick and what, in fact, we actually are.

Sometimes it's uphill work. This stuff starts out couched in friendly comprehensible language but often gets bogged down in technical terms very quickly. It seems not everyone has the skill of Stephen Hawking; I found A Brief History of Time entertaining and comprehensible.

One thing I'm picking up from my current reading material, and anyone who's read this blog before may recognise the topic, is the battle between materialism and dualism. I may have been sitting on the fence before but recently I fell off into the materialist garden. I suddenly realised that it was, if you'll pardon the pun, a no brainer. When trying to describe the mechanism of the mind, the consciousness, dualists postulate a mysterious non-physical spirit controlling the brain. This is fair enough in itself but in order to provide a complete scientific theory of mind they should then have to show how consciousness arises in this ethereal organ, describe its mechanism.

But this is merely moving the problem and if we've got to work out what the mechanism of awareness is, Occam's Razor suggests we keep it simple. Why add this extra step? The spirit needs to be as fully described as the brain and if we're not careful we're going to end up postulating a meta-spirit running the spirit (trialism), then a meta-meta-spirit (quadralism) and so on into infinity.

However, as I have observed before though, we should be wary of scientific arrogance which tends to imply that we've pretty much got it sorted by now. I am firmly of the opinion that there are great swathes of science yet to be revealed, some of which will change our understanding of the way the universe works more than the discovery of quantum mechanics did. Perhaps science itself is fractal; however much we discover there will always more to be discovered - more devil in the detail and infinite detail in the devil.

I suspect one sign that we're missing something big in science is when the extant theory of How Things Are starts tying itself in knots in order to fit with the known "facts". Take the Ptolemaic System. Starting with the obvious fact that the Earth wasn't moving and was at the centre of the universe it worked outwards from there. It was common sense, surely, the only problem being when it had to start taking the observed movements of the planets into account.

It's too longwinded to go into fully here, but in order to maintain the status quo of the geocentric universe, scientists had to postulate an extremely complicated system of epicycles and equants which, as observations grew more precise, grew ever more complex. In the end it was far simpler to throw out the old geocentric theory and start again (no matter what the church might have thought at the time).

So beware of theories which start getting too complex, growing Occam's Beard in an attempt to fit in with their favourite worldview, and introducing mechanisms which start displaying signs of recursion and infinity. This is probably a sign that there's something very basic wrong, and something very big missing.

Sulci Collective said…
"and if we're not careful we're going to end up postulating a meta-spirit running the spirit (trialism), then a meta-meta-spirit (quadralism) and so on into infinity." - isn't this how notions of a divinity over and above ourselves arose? ie to answer/remove the stress over those questions mankind couldn't answer for himself - mainly the fact of our mortality rendering our existence nugatory...

I think science is really struggling, partyicles that have never been proven to exist but which probability suggests most definitely should, in order to hiold their teetering theories together with string (theory). What I find intriguing is that so mnay of these enw theories are in fact extended and rather beautiful metaphors - ie our currency as artists/writers - the butterfly effect being one of its highest examples.

Me, I'm a relatavist. I don't really believe in any unshakeable physical reality, only an agreed consensus on such laws as appears to approximate the workings of the world. But I think these merely mirror how the human visual field works and how the brain organises data and conceptualises from stored templates from it. And at the heart of all this - LANGUAGE, through which all (shared at least, if not individual) conceptualisation takes place. So time for the artists to grasp the nettle once again and deal with perception, with language and particularly with nominalism - the relationships between things and their ascribed name a la Plato. Much material lies within such investigations.
Wednesday, November 04, 2009 9:53:00 am

Catmachine said…
You definitely have something there. I am convinced that part of what we actually are is a lot to do with language, and am moving towards the view that before we developed language we weren't conscious.
Wednesday, November 04, 2009 11:02:00 am