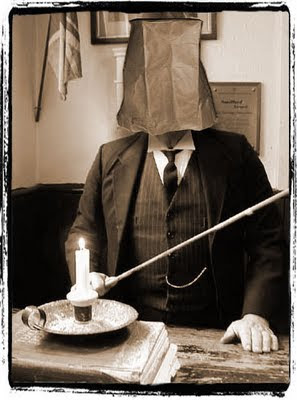 For the first time in a while I've booked a day off work. In theory it's in a bid to catch up with any number of the millions of things I seem to have to complete just to keep my life ticking over, but in truth I've just been lazing around. I think I need to though. After working flat out for what seems like a decade it probably does me good to kick back and not do very much for a while.

It's a shame it makes me feel so guilty.

Where does this apparent "work ethic" come from? I've long been comfortable with the fact that I'm a lazy sod and probably have been all my life. I still remember what one teacher said to me.

"The problem with you, Limb, is that you're bone idle."

If I am - and who am I to contradict a teacher - I'm doing a very good job hiding it. To paraphrase The Cure: however much I think I do - it's never enough, never enough.

In these enlightened days of course no teacher would dream of speaking to a pupil like that. They wouldn't be allowed to. One side effect of paedophiles becoming the only acceptable target of human hatred is that people are starting to see them everywhere. I don't think that the percentage of paedophiles in the population is any greater or less now than it ever was, but what with all that excess hatred sloshing around in brains these days, people are being misidentified as perverts just to make sure there are enough to go around.

This does have some positive side effects. Children are being are treated with a bit more respect in schools now. I doubt very much that these days pupils are being told that they're a "waste of protoplasm" or that the school "will be a better place once you've gone", which can only mean that they're going to come out of secondary education with a higher sense of self esteem than I did. I doubt that any contemporary pupils ever hide in the toilet vomiting with fear because of the behaviour of one of the teachers. Other pupils maybe.

But why can't we treat our children with some respect as a matter of course because it's the right thing to do and not just because we're afraid someone's going to cry paedo! and let slip the dogs of moral panic? The negative side-effects of this state of affairs far outweigh the positive. School employees are so afraid of physical contact with the pupils these days that nit nurses are out of a job and, instead of being a rare affliction that might effect the scruffiest kid in class once a term, head-lice are an all pervasive fact of everyday school life everywhere.

In addition, the Paedo Until Proven Innocent policy is quite insulting really. When I was a kid I'd have loved it if one of my favourite authors had come in to talk to us about his or her books, but apparently now they all have to be vetted, with the result that they're staying away.

Discussing this, Philip Pullman, author of the His Dark Materials trilogy, said "...the implication [is] that no adult could possibly choose to spend time with children unless they wanted to abuse them. What will it say to children? It'll say that every adult is a potential rapist or murderer, and that they should never trust anyone."

It's going to be a strange world in twenty or thirty years' time. Children will grow up in isolation, raised by remote control or by robots, so there won't be any paedophilia.

Who are we going to hate then?
hate history journal philosophy psychology