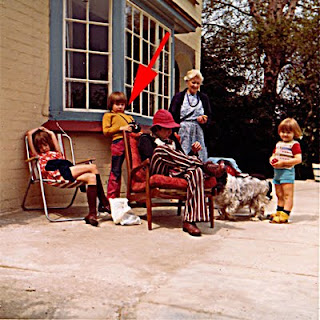 For some reason I seemed to spend the last couple of hours of the night awake, wondering what I was going to write here. At the last minute I fell asleep and started dreaming.

Once again I was in Pendaleon House, the place my paternal grandparents lived throughout the seventies and eighties. I suppose it's not surprising that it's stuck in my head so much; from the ages of five to at least twenty when I went there it was a treat. A holiday, a few days off from the nightmare of school. Plus I suppose it could be said that my grandparents spoiled all three of us (when you're a kid that's a good thing).

And more even than that. The house had a surprisingly large garden with an unexpected number of sheds. My sister and I discovered a way into the extensive shrubbery which became our own version of Narnia, "Tufty", a land ruled by a king with a keen interest in photography. On our second expedition into Tufty we discovered it was several hundred years later and the castle was overgrown and deserted. I still remember how spooky that was, the cracked courtyard, the weeds, the rusty portcullis, despite the fact that well over ninety-nine percent of the effect was in our heads. As indeed was the ghost that chased us back to the house once from the end of the lane.

I still feel like taking a few days off and going there to unwind from time to time; it's just a shame that I've become cut off from it. It only exists outside the area of space-time that I have still access to. It's just as well; I think the Limbs Grandsenior might have been somewhat perturbed if I'd have suddenly turned up at my current age; my grandmother used to have problems enough with me being a goth.

Instead I have to make do with the Proustian reminders that pop up every now and again, unexpected and pleasant. The sound of distant church bells. The smell of the countryside (this includes cowpats). The call of wood pigeons (Coo cooo-coo, coo-coo. Coo-coo), the sound of a single engined light aircraft. Grasshoppers. A certain type of sunshine.

Of course it wouldn't be the same if I did go back. The garden looks smaller in Google Maps. Has part of it been built on? I hope not. There have no doubt been many changes. In the dream last night my grandfather - who has been dead for ten years - showed me that a new road had been built between the dining room and the downstairs toilet. He then started taking me across the street (Selsey Road) to show me something else. Unfortunately then I woke up to a dark wet twenty-first century Brighton. The alarm clock had failed to wake me (again human error, and no fault of the alarm) and I had to get up write this, leave for work.

Direct stimulation of the brain can release old memories in surprising detail. It's a somewhat haphazard procedure, but if it could be made non-invasive and targetted, we could all perhaps spend some time chilling out in our childhood.

It would put travel agents out of a job.
dreams journal memory