'I am afraid I cannot convey the peculiar sensations of time travelling. They are excessively unpleasant. There is a feeling exactly like that one has upon a switchback--of a helpless headlong motion! I felt the same horrible anticipation, too, of an imminent smash.'
H G Wells, The Time Machine 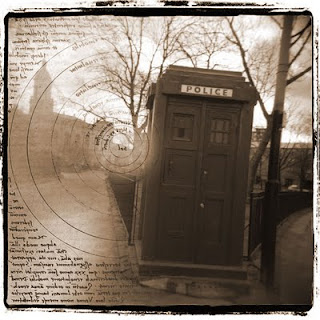 Let us assume that our Temporal Copernicus has indeed put us straight. The present is NOT at the centre of time, and it is arrogant and humanocentric to assume that it is, although just like his astronomical forebear, he is unable to go out there and prove it.

It was not until over four centuries after the publication of De Revolutionibus Orbium Coelestium that human beings were finally able to look back at the Earth and know that Old Metal Pants was right.

It'll be a while then before the crew of the temporal equivalent of Apollo 8 take a trip around the back of a-week-last-Tuesday, returning with pictures that will change forever the way we see time.

But they will one day. Come to think of it, they should have showed up by now. If time travel is discovered in, say 2555, perhaps their first efforts might only have taken them to the previous week, the equivalent of Earth orbit. But as chrononautics develops, even if it takes them another five hundred years, they will eventually be able to reach back this far. So where are they?

I haven't seen them. One interpretation is that time travel isn't possible, but I refuse to believe that because (a) it's boring, (b) I'm wary of the mistake made by Simon Newcomb in 1903 when he stated that heavier than air flight was not possible "in the present state of our knowledge" (the Wright Brothers took to the air in Kitty Hawke a couple of months later) and (c) Clarke's First Law:

So where are the buggers?

It could be that once discovered, Time Travel is very carefully policed to avoid any possible instances of grandpatricide. In fact it would probably be self policing - people wouldn't want to risk ending up back home in a parallel universe where they'd never been born. Any time travellers will probably be ultra-cautious, taking care not to upset anything or step on any inappropriate ants.

So this means they could be all around us. That woman on the bus looking around with wonder and joy - she could be a citizen of the thirty-first century on holiday.

Maybe not, though. Some theories state that it's only possible to travel back in time as far as the beginning of the Time Machine's working life - meaning that a Time Machine is not so much like a bicycle but more like the London Tube. So in order to start receiving visitors from the future we've got to actually build the thing and get it working.

The Large Hadron Collider has been cited as one such possible Time Machine, so if we ever get it working properly that might open the floodgates from the future. It does seem to be having trouble getting going though, it's just one thing after another. Perhaps it's constantly being sabotaged by future objectors, the temporal equivalent of Greenpeace trying to prevent the past from becoming spoilt by invaders from days to come. Every time it starts working it seems to break again.

And now a bird's dropped a baguette in it. I think we need to coin a new word:

Bob said…
It is possible, of course, that there have been time travellers from the future throughout mankind's history, but that they stay just slightly phased out of our reality so that they can observe us but not be observable. They may have some kind of technology that allows them to be both invisible and incoporeal, so that we'd walk right through them or, indeed, they could sit on top of people in the best seats of the Colliseum when observing those poor early Christians take on the lions. After all, it's a fairly long leap from wanting to see history taking place to actually wanting to effect and, therefore, change it.
Thursday, November 12, 2009 10:01:00 am

Sulci Collective said…
Time is just a handy organising principle for us humans and our activities and for our poor little brains to cope, through memory, here & now and forward thinking/planning.

Do I believe in the present? Probably not. It just seems to stand in relationship to the inevitable fact of our mortality as a countdown so we'd better get on and be doing things. At death, our own personal time seems to come to a grinding halt. Half-life decay may be a better way of structuring our time.

(I haven't had the time to think any of this through properly).