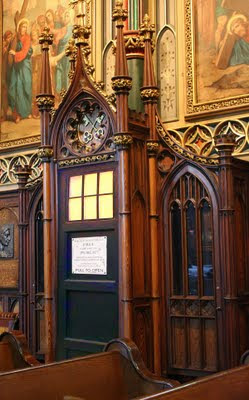 It's a worthy organ with a long history, but these days there seems to be so little time that buying the Radio Times hardly seems worth it. As a kid an issue would seem to be around so long that it had time to get dog-eared and tattered; now it seems like I've hardly had time to shake out all the advertising supplements before sticking the thing in the recycling.

I'll be buying it this week as it has a cover featuring Doctor Who. This seems to be a tradition with me; they were worth collecting because Doctor Who based Radio Times covers used to be few and far between. It may surprise you to learn that Tom Baker never got one during his seven-year tenure.

Nowadays you could wallpaper the living room with them.

But what's so special about Doctor Who? Well, I'm a fan. That's fine these days of course, but there was a time that such a confession was not to be made unless you were absolutely certain you were amongst sympathisers lest you bring down the ridicule of the cool brigade. Back then we liked to think of it as a Cult Programme, and whilst it satisfied some of the criteria to be described thus, there was always that element of embarrassment that fans of, say, The Prisoner would never have had to suffer.

It's nice to finally be vindicated what with the stupidly high ratings and multiple Radio Times covers. We were right all along!

But just what is it about the show that inspires such, some would say unhealthy, devotion amongst its fans? Why am I a fan?

I don't remember becoming one. Doctor Who is just something that was always there, like the Moon. I watched it. My earliest memories of it are monochrome, and given what I remember I must have been very young. The first TARDIS team I remember was the Doctor Jamie and Victoria. Given that I also remember Daleks from this era the earliest we can pin it down to is Evil of the Daleks (1967). I was two. I remember the following story (Tomb of the Cybermen) as well, so it's no fluke of memory - I was starting to take things in at this age. Of course I don't remember understanding the stories in those days, but then again I probably didn't understand half of what my parents were talking about either.

Doctor Who seems to have been an integral part of that black and white childhood. The lumbering monsters of that time (and aside from the Daleks they really did all lumber, go on, have a look) populated my dreams but never scared me quite as much as the self-created enemies within my own brain, although my parents did have to turn off The Ice Warriors (1967) as I couldn't bear their hissing, whispery voices.

When we moved to London my childhood started being shot in colour even though we still had a monochrome TV and Doctor Who was still being broadcast in black and white. One of my first memories of arriving at our new home was that there was a police box on the corner of the street; I don't recall having seen them in Birmingham. Another early London memory was my mum dressing up as a cyberman in the garden. My dad was the Doctor, I was Jamie and my sister Zoe. I used to read a comic that had a Doctor Who strip in it.

Then the Seventies started and it all changed.
to be continued
doctor who doctor who memoir journal memoir radio times tv