He'd been the definitive Doctor for what seemed like forever and a whole new generation of fans had been growing up with him in the role. Then all of a sudden he'd changed and there was someone else in his clothes. Someone who looked far too young. Would the programme survive such a drastic metamorphosis?

In theory we'd have to wait until January 1982 to find out what this new incarnation was going be like. Back then a ten month wait such as this was an eternity - just what was I going to occupy myself with in the meantime?

Well, there was always music. That was rather interesting in 1981. I'd become obsessed with Toyah, and there were any number of other fascinating bands around, such as Soft Cell, The Human League, Ultravox, Visage, Department S, Classix Nouveaux and countless other combos who, years later, would briefly become fashionable again on the soundtrack to Ashes to Ashes.

So what with the New Musical Obsession and the discovery of girls there was a very real danger that I'd forget about Doctor Who and grow up, just like everyone else pretended to be doing. Luckily help was at hand.

My dad was still at the Radiophonic Workshop and this time had been asked to write the music for three of the year's quota of stories, including what I thought at the time would be the first of the season, the oddly titled Four to Doomsday. In fact the titles had been getting steadily more adult for while now - no more Terror of things or Horror of things, or indeed things of Evil or things of Death.

Strangely, the script didn't seem to refer to the previous years events on Logopolis at all and cut straight to the chase. A little disappointing, but there you go. At least we were going to get to watch it being filmed, although this time we weren't to be allowed on the studio floor, having to watch instead from the observation gallery, a glass fronted box up in the rafters of the studio, looking down from what felt like several thousand feet onto the interior of the Urbankan spacecraft and, in one corner, the TARDIS console room.

It really bothered me that they seemed to be shooting things out of sequence. At first we were treated to a repeated display of the po-face Ancient Greek android Bigon showing the Doctor around and then Tegan progressively getting more and more hysterical as she tried to hotwire the TARDIS.

I had a bit of a surprise the following January when Four to Doomsday wasn't actually the first story of the season aired. Instead the first story was called Castrovalva, and picked up directly from where Logopolis had left off which I found much more satisfying narratively. There was even a mirror scene of the cantankerous diatribe Tom Baker had let loose on his companions in the latter, where new man Peter Davison gave them a pep talk to explain how valuable to him each and every one of them was. Even Adric.

What was even more surprising was that for reasons unknown, the BBC had decided to start broadcasting the series two episodes at a time during the week on adjacent days. Seemed odd, but any discomfort I felt at the series no longer being on the traditional "Saturday night" (so beloved of commentators who invariably start going on about the furniture) was more than offset by the fact that I was getting twice as much in a week.

So begun one of my favourite periods of the programme. This might seem odd given that my formative years Doctors were the fondly remembered Pertwee and Baker, but there was something refreshingly different about Davison, something I couldn't hope to put better than Steven Moffat did in Time Crash, so I won't. Plus I was generally having a miserable time at school and so the world of Doctor Who provided a much needed escape route.

I was also now of an age when I could follow all the nuances of the stories, even the rather cerebral and confusing ones by Christopher H Bidmead. This was stuff I understood and could conceivably imagine myself writing. 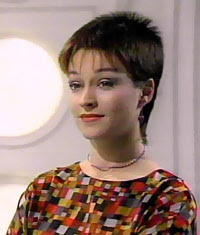 Plus there was Tegan. I've no idea why fandom generally complains about her these days. Back then, as an impressionable teenager, I thought she was great. She was the sort of character that nowadays people would describe as "feisty". Just like Rose, Martha and Donna, she had a family who appeared on screen (Auntie Vanessa, Cousin Colin and Grandfather Andrew Verney), although unlike Jackie Tyler at least Auntie Vanessa had the decency to get killed by the Master halfway through her first episode. Of course if the role was being created for the modern series they'd probably make her a kick-boxer or something; but even without that she still managed to knock Adric out cold. She was certainly far more interesting than her TARDIS room-mate, the psychic wet lettuce Nyssa. How come they had to share a room anyway? The TARDIS interior was huge.

So all in all for me the Davison years were something of a golden age. They even killed Adric off in the first year.

And I escaped from school and made it to university.
doctor who doctor who memoir journal memoir music new wave tv