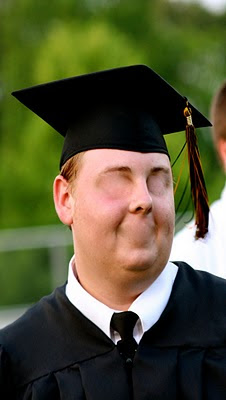 On Friday I went through a graduation ceremony for the first time. It was just for my creative writing certificate, but I figured that seeing as back in the day (when I first graduated) I was so full of anti-establishment attitude that I didn't bother attending, I might as well go along and enjoy it this time round.

And I got to wear the silly gear. Expensive enough to hire from Ede and Ravenscroft, but worth doing (so I told myself) just the once.

Being "gowned" was an odd experience. They're just clothes after all - if anything all you should feel is a slight sense of discomfort and embarrassment. I didn't feel either of those but was disconcerted to feel a change in demeanor sneaking over me.

I started to feel pompous, arrogant and self important. Why would a change of clothes make me feel this way? Luckily my "real" self was still overseeing everything and found this funny. I was able to laugh at the idea of me shouting "You! Boy!" or flying into an apoplectic rage at an incorrect Latin declension and flinging a board-rubber across the room. But what if I wore the things every day? Would I start to believe I was better than everyone else?

Judging from their behaviour that's certainly what most of the teachers in my school - or at any rate the ones who insisted on wearing their chalk-stained academic garb on a daily basis - thought. No wonder they were such arseholes if they had to wear the Robes of Power every day.

Then again they were probably arseholes anyway, and the sense of arseholdom engulfing me when I donned the aforementioned robes was merely my own behavioural association with the gear. It was much the same when I dressed up as a vicar when in a play - there wasn't much acting skill required, the moment I had the dog-collar and half-moon specs on I found myself channelling Derek Nimmo.

I wonder, though, if this means that certain items of clothing or modes of dress have a lot of power through generations of learned association? Does everyone run the risk of turning into reactionary old bigot the moment they put on a white wig and judge's robe? And what about a policeman's uniform - when you put that on do you instantly turn into a racist thug?

One would hope that there are positive examples of this phenomenon as well. Those selfless individuals who work in the medical profession - is their altruism given a boost by looking the part? And maybe this explains the nerd stereotype; if you want to be really good at computer programming it will enhance your skillset if you wear specs, gain weight, develop dandruff and cultivate a body odour that would fell an elephant at twenty paces.

It all comes down to pretending again. If you pretend to be something you aspire to be hard enough, then you may as well be it. And if a bit of costume helps you get into character then why not?
clothes image journal look psychology

Sulci Collective said…
The problems arrive with the projections other people put on your uniform - to wit nurses...
Monday, February 01, 2010 5:43:00 pm