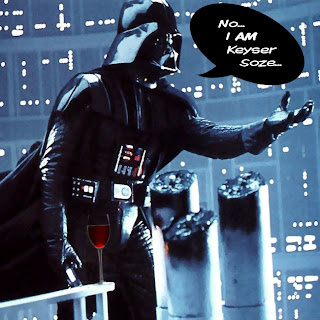 Ironically in this information-rich era it seems to have become something of an obsession for people to not know certain pieces of information. I am talking about the manic spoilerphobes who go postal at the mere whiff of foreknowledge of something that they're planning to enjoy.

That's not to say I don't understand where they're coming from. Of course certain films are specifically designed to be enjoyed more if you don't realise that Bruce Willis is dead or that Kevin Spacey is in fact Keyser Soze. I just think that back in the day people didn't used to get nearly so wound up about accidentally finding out the minutiae.

When I was a kid I was in the enviable position of being able to read Doctor Who scripts in advance; in no way did I consider that I was ruining it for myself. The joy lay not in the details of the plot remaining hidden until the date of transmission but in the way in which the story was executed, in the acting, the direction and other stagecraft. In some ways I found that already having a basic grounding in the plot meant that I could appreciate the rest of the story all the more. Remember, these were the days before video recorders, and when it was gone it was gone.

What's more it seemed to take a ridiculously long time for films to get their first showing on terrestrial TV; 2001 A Space Odyssey was released in the cinema in 1968 but I believe that it wasn't until the eighties that it was finally shown on TV. On my birthday if I recall correctly.

I didn't always get to see the films I wanted straight away (if at all); often I had to make do with novelisations (which usually seemed to be by someone called Alan Dean Foster). Then too there were the fotonovels; comic strips formed from film stills. Due to the nature of the film and my relative youth it was years before I got to see Alien (1979); but I was able to enjoy the story both via Mr Foster's work and by standing in Forbidden Planet in Denmark Street reading the fotonovel for hours at a time. Both activities would be considered high treason by today's Spoiler Police.

There is of course far much more information floating about these days, and all just a click away. I suppose it is possible for people to accidentally find out important details about something in advance that they might not have otherwise wanted to, but has it occurred to them that instead of unleashing a torrent of abuse at someone on an internet forum that their interests might be better served by just... not looking?

I am missing the point of course. By not looking they're being denied an outlet for their rage. Internet forums are a marvellous arena for being incredibly rude to someone with no comeback, and the one thing that human beings seem to crave above almost anything else these days is being allowed to hate, getting the opportunity to be holier than thou, displaying righteous anger. In what better arena to indulge than in the backwaters of online discussion boards devoted to TV and film?

What's more, the artificial rules of No Spoilers are an ideal set of parameters for allowing unlimited flying off the handle. Advocates of the Unspoilt can claim that almost anything is a spoiler if they try hard enough. Unbelievably, the following example is genuine. Some years ago in a Usenet group devoted to the discussion of Buffy the Vampire Slayer, I was gobsmacked to read one poster ranting about the fact that a scene in one episode was a "spoiler" for something that happened in the next one.

I shit you not. It had obviously not occurred to that fan that perhaps Joss Whedon had just wanted the audience to know certain facts at that point, that it was part of the story. No, they thought it was far more likely that he just wanted to wind up spoilerphobes for a laugh.

But deep in their heart even they probably didn't believe it. They just wanted an excuse to have a go because certain things that had been happening that season weren't to their liking and insulting their hero made them feel big for a few seconds.

Some fans are funny like that. They always hate the ones they love.
aliens buffy the vampire slayer doctor who film hate joss whedon journal people tv writing