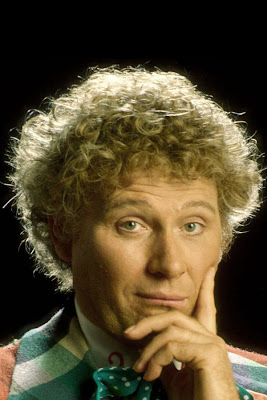 After the dramatic spectacle of the Fifth Doctor's exit, the Sixth Doctor really had something to live up to. And this time we weren't going to have to wait a whole year to see what he was like. For the first time (in a never to be repeated experiment) the regeneration had taken place before the end of the season. This was a move as bold as the transmission times being shifted to mid week. I couldn't wait, and what's more wouldn't have to.

I must admit I was dubious about the casting. Actor Colin Baker had already appeared not long before as Time Lord guard Maxil, who had attempted to execute the incumbent Fifth Doctor. Would they attempt an in-story explanation for the remarkable similarity? Furthermore I was already familiar with him from his appearance in Blake's Seven as Bayban the Butcher. Did this mean that the Sixth Doctor was going to be played as a violent maniac in leather and studs?

They passed on the leather and studs, but kept the violent maniac, at least that's what I thought when I watched his first story, The Twin Dilemma. Having him attempt to strangle companion Peri during the first episode was an interesting twist, especially given that only hours before he'd laid down his fifth life for her. If they'd kept up this theme it could have made for an interesting story, but as it was, as soon as the TARDIS arrived on the planet Jaconda, the plot deteriorated into a brightly-lit embarrassing affair. I was glad to see the back of it, even though it meant I wasn't going to see any more of the show for a year... Still, this was the new Doctor. Whether I liked it or not.

The following year the show was back on Saturdays, but in another odd move each episode was now 45 minutes long, which meant that each story now had only two (or occasionally three) episodes. I was no longer on campus and instead was living in a student house in Hove above a dry-cleaners. This meant that I could watch Doctor Who in the living room on a large monochrome TV, which was a marked improvement on the previous years' viewing arrangements. On the downside, all four girls with whom I was sharing the house seemed to invite their cool boyfriends round to visit on Saturday evenings, which meant that even though I got to watch the show, it was against a steady background of relentless piss-taking.

The season was an odd beast. Despite flashes of brilliance, the bulk of it seemed to be heavily relying on continuity or, dare I say it, fanwank. I was almost as if, I don't know, producer John Nathan-Turner had let a rabid Whovian loose on the scripts...

It started to find its feet though and despite largely fan-pleasing appearances of the Cybermen, Sontarans and the Second Doctor, I found myself warming to the Sixth Doctor, garish costume and all. For the end of the season they pulled out all the stops and re-engaged Graeme Harper to direct (and co-incidentally my dad to score) the final story, a bizarre tale of Davros, Daleks, DJs and dead people. Revelation of the Daleks.

The Doctor and Peri were almost relegated to the sidelines as a whole company of vivid fully-formed characters leapt to the fore. Bounty hunters Orcini and Bostock, "grave-robbers" Natasha and Grigory, sadistic mortuary attendants Takis and Lilt, Alexei Sayle's DJ and Clive Swift's Jobel, the latter a marvelously pompous buffoon with a blatantly obvious wig and a fine line in acid put-downs, telling his love-struck assistant Tasembeker "I would rather run away with my mother than own some fawning little creep like you!"

It was after this story that I realised the Sixth Doctor had won me over. The role was obviously in safe hands and I looked forward to the next season.

Then the BBC announced that the show was being suspended.