"If a person who indulges in gluttony is a glutton, and a person who commits a felony is a felon, then God is an iron."
Spider Robinson 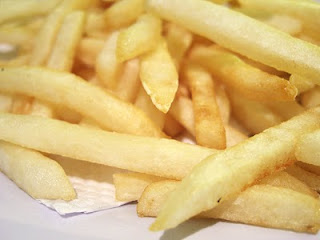 Well, that's not strictly true. I am sure that watching, say, the reimagined series of Battlestar Galactica hasn't done me any harm no matter how much I might have frakkin' enjoyed it. No, I'm, talking more about physical rather than intellectual pleasure.

I'm sure you know what I'm talking about, and it's not the thrill that some weirdos get from a session down at the gym. I'm talking about eating whatever we like to eat, drinking as much as we want, and in some cases introducing pharmaceutical products into our bloodstreams in order to alter our mood or behaviour. These are all things that can give us enormous pleasure and yet seem to be ultimately very bad for us.

It's not that hard to work out where this annoying state of affairs comes from at least with respect to the food and drink. All we need to do is to invoke our old friend Thugg the Caveman.

Back in Thugg's World it would have been impossible to overindulge in this way. Thugg and his cronies would have considered themselves fortunate if they were lucky enough to bring down a mammoth a month; what's more that mammoth would then have to sustain the whole tribe until the next mammoth day bonus.

Thugg's physiological and psychological makeup would be fine tuned to take advantage of this state of affairs. Fatty foods were a useful source of energy so craving them would be a good thing - Thugg would have had no idea when he'd next get the chance to stuff his face. Foods containing sugar - a substance that provides a quick and easy source of oomph - were even rarer, so worth craving even more. Thus was the concept of the sweet tooth born, a biological imperative that was almost impossible to disobey.

Evolution had no idea that only a few thousand years down the line we'd start inventing things that stimulated these instincts supernormally. Up until Thugg's time, pleasure had been designed as a survival aid, and doing what felt good was a way of ensuring that the future contained our genes rather than those of our rivals.

But this quest for pleasure became a runaway train, and we discovered how to short-circuit the survival aspect of pleasure by inventing doughnuts and chocolate. Our instincts for survival are still strong - which is why it's so difficult to go on a diet.

That explains the food. What about the sex and drugs and... well, rock and roll has not, as yet, been proved deleterious to well-being.

Sex isn't either. In fact as far as our genes are concerned sex, is the be all and end all. The only reason we macroscopic beings exist in the first place is to have sex in order to pass on more copies of those selfish genes. We are the dispersal vectors of DNA.

But from the point of view of one of these vectors... sex has become bad for you. It's the most important survival instinct and therefore the greatest pleasure, but unfortunately our attempts to access this pleasure outside the normal procreative route, to invent the sexual doughnut in other words, have backfired.

The invention of the contraceptive pill was seen as the birth of a new sexual liberation (although to be honest I'd be more convinced if it had been readily available for both sexes) after years of repressed Victorian attitude. As a young teen I hoped that by the time I became sexually active these new morals would have become bedded in and I'd be having a whale of a time.

Of course, then AIDS appeared. Absolutely typical. All sexual freedom had meant was that an opportunistic virus had made a break for the big time. So, it was back to prophylactics, the grandparent's contraceptive.

One day we probably will invent the sexual doughnut; some kind of direct stimulation of the pleasure centres of the brain. And then, as I discussed before we may become like those rats, and stimulate ourselves at the expense of all else and starve to death.

It would be one in the eye for the selfish gene though.

Regular readers of this blog will know how fascinated I am by the mind and by consciousness. As I'm now writing this on a weekly rather than bi-daily basis, by the time I come to write the next entry my brain will have had its first ever cold-reboot. By that I mean I'm having a general anaesthetic for the first time, which by all accounts is very different from going to sleep. If a night's sleep is the equivalent of the brain being on standby, a general anaesthetic is more like turning it off and on again.

I am very interested to find out what this experience is like, and will report back here next Sunday.

Metablog
As I'm still using my repurposed blog-time to get a move on with writing my novel, I'm pleased to report that after another week it still seems to be working I have now moved the central character on a year albeit within a flashback sequence.